Buhay (in a flashback)

Ades is a recurring character in the Filipino fantasy-themed television saga Encantadia produced by GMA Network. She is played by Ana Feleo.

Ades is the chief dama of Mine-a and Amihan. After her death, she became the Spirit Guide of Amihan. Ades is one of the few people that know that Pirena is the daughter of Hagorn.

Ades is one of the most loyal and trusted damas of Lireo. Ades is also very wise, this is shown when Hagorn captured Pirena to use against Mine-a she asked Hagorn the question "Are you willing to hurt the first born of Mine-a?". She knew how to construct her words well that only Hagorn understood what she meant.

Ades wears a different type of uniform of the damas. In Episode 58 (Paraan) Ades makes a re-appearance in Devas she is wearing a white robe with gold linings.

Ades is a dama serving Lireo pressumably since Mine-a's reign as she knows the secret of Pirena's true parentage. She is undeniably close with Mine-a. Being a high ranked dama, she is entrusted with tasks that are only given to the most trusted servants of Lireo like accompanying the Sang'gres in the forest, keeping Mine-a's letter for Pirena, watching over Lira (Mira) until she grew up. During the fall of Lireo, Ades is one of those held captive. Amihan came to rescue them but was unable to take all of them with her. Ades suggested she take the females and the Adamyans. Hagorn became angry that because of her meddling act, Amihan managed to escape with half of the prisoners. Hagorn then stabs her and she stumbles unto the floor. As Pirena was about to leave she touches her foot and tells her about Mine-a's letter but before she could tell more details she passed away. Ades appeared to Lira at the boundary of life and death to fetch her to Devas. Her persuasion was actually a test for Lira. After Lira passed the test, she bestowed to Lira the blessings of ten of her ancestors. Ades again appeared taking the form of a white parrot saving Lira from Gurna when she tried to kill her during her sleep. It turns out Ades was the answer to Amihan's prayer to Emre requesting someone to guide over her daughter.

Ades continues to watch over her beloved Sangrre's even in the after life. It was shown multiple times that she still worries and expresses her deep concern for them while having a conversation with Emre. She is also the one present when Amihan decided to eat the fruit that will give her the ability to be reborn in to a body of another. Despite her best intentions to explain to Amihan the negative consequences of her actions, she still supported Amihan on her chosen journey.

Ades recieved the standard powers of an Ivtre when she died and got accepted to Devas. 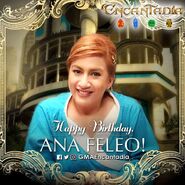 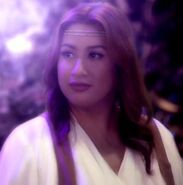 Add a photo to this gallery
Retrieved from "https://encantadia.fandom.com/wiki/Ades?oldid=41531"
Community content is available under CC-BY-SA unless otherwise noted.