Did nostalgia bring you here? This will surely bring back memories.
This page contains information about Encantadia 2005-2006 series.
You want to relive the fantasy in your heart?

Alwina is one of the major characters and protagonists produced by GMA Network for the Mulawin saga. In Mulawin and Mulawin: The Movie she is played by Angel Locsin while in Mulawin vs. Ravena she is played by Heart Evangelista.

Alwina was taken to Encantadia from the Mortal Realm by Muyak after she died. There, in Encantadia, Alwina met Ynang Reyna, who treated her injury. Alwina and Muyak became best friends. They also gave her a task, wherein Ynang Reyna created Rahuyo who she says is her son and has the same physical appearance as Aguiluz/Julian. Alwina felt love. Ynang Reyna wanted Alwina to eat the Gintong Kanin so she can stay forever happy in Encantadia. (More TBA)

She was taken to Lireo from the Mortal Realm, again, after being severely injured. When she woke up in Lireo, Imaw informed Amihan and Danaya. Alwina then sees Aguiluz and they later wed in Lireo. 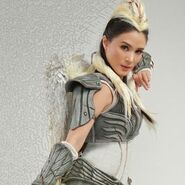 Retrieved from "https://encantadia.fandom.com/wiki/Alwina?oldid=39770"
Community content is available under CC-BY-SA unless otherwise noted.