In every ending there is a new beginning
This page contains information about Etheria (2016)
A new threat has come to challenge the current rulers of Encantadia.

Hera Andora (Noblewoman Andora)
Babaeng Mais (as called by Lira; mocking the color of her hair)

Died during the fall of Etheria (Ivtre was preserved and then later released by Ether from a jar and took Agane's dead body as a temporary vessel; first death)
Slain by Sang'gre Alena using the Brilyante ng Tubig (second death)

Hera Andora is an antagonist from the Philippine television fantasy series Encantadia produced by GMA Network. She is currently within Agane's dead body.

Andora is one of the Herans (dugong bughaw/nobles) of Etheria. She is from Hera Sensa - an Etherian tribe known for its denizens' abilities to control using the mind and other mental or psychic powers. She is resurrected by Ether into the corpse of Agane. Until now, she is still possessing Agane's dead body as her vessel of her resurrected spirit. 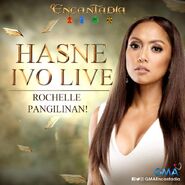 Andora's soul in a jar being held by Ether

Andora reading the mind of Amarro

Add a photo to this gallery
Retrieved from "https://encantadia.fandom.com/wiki/Andora_(2016)?oldid=39419"
Community content is available under CC-BY-SA unless otherwise noted.