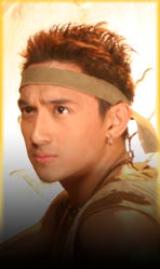 Apek is a character in the Philippine fantasy television series Encantadia and Etheria produced by GMA Network. Filipino actor Michael Roy Jornales played the role of Apek in Encantadia.

Apek is Ybarro's faithful friend who is a master in hand-to-hand combat, similar to Axilom. He is a thief that steals from Encantados. He is usually seen with Ybarro and Wantuk who are his fellow Mandirigmas.

Unlike his close friend Wantuk, who is a coward, Apek isn't afraid of anything and is known for his skills on hand-to-hand combat. He is now a Lirean soldier after the war against Hathors.

Apek has impressive speed and reflexes, particularly with his hand movements.

Retrieved from "https://encantadia.fandom.com/wiki/Apek?oldid=40942"
Community content is available under CC-BY-SA unless otherwise noted.