Aquil is a supporting character from the Philippine fantasy television series Encantadia produced by GMA Network. In the remake version, he is portrayed by Rocco Nacino.

Aquil is the chief of the Lirean soldiers. He served until Amihan's reign. He is now married and has offspring with Sang'gre Danaya.

Aquil highly respects the rules of Lireo and because of this he became the captain of the Lirean guards. He dislikes those who disrespect the rules of the kingdom and expresses his disgust no matter what reason they have for committing the crime. He and Danaya agree upon each other's opinions. Often siding with each other during arguments.

Aquil is already grown up when introduced in the series. He became the mentor of the Sang'gres when they were young until they were old. He trained them to use weapons and hone their skills in fighting under the request of Mine-a. Even at a young age, Aquil and Danaya are already affectionate of each other. Aquil often notices Danaya the most during training.But what you did not know that Aquil's father is a half/diwata and half/hathor

Expert Leadership and Tactician - Aquil was shown to have an expertise in war tactics, being able to serve Lireo for a long time. It is worth to note that Aquil is already around as the general of Lireo's army when Minea was crowned queen of Lireo. Making his strategic making skills more experienced than any Sang'gre's. He seemed to have also trained the Sang'gres in the field of strategy making.

Highly Skilled Combatant - Aquil appeared to be one of the most strongest and celebrated warriors in all of Encantadia. Even without special abilities or keeping any gem. He proved more than enough that he is a very capable fighter. With many years of experience, ranging from the time of Queen Minea(and possibly even before that) he was shown to have excellent reflexes and weaponry skills. He can combine his swordfighting skills and martial arts to defeat many enemies in a short amount of time. 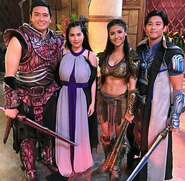 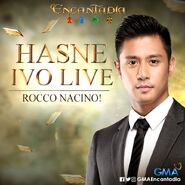 Birthday Greeting for Rocco Nacino.
Add a photo to this gallery 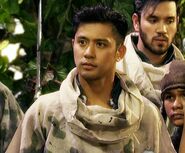 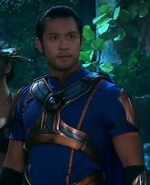 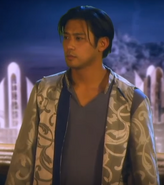 Aquil's casual clothes. (used after being suspended as a mashna of Lireo)
Add a photo to this gallery
Retrieved from "https://encantadia.fandom.com/wiki/Aquil_(2016)?oldid=41251"
Community content is available under CC-BY-SA unless otherwise noted.