You cannot hide from my eyes. My eyes see everything, you're not from this time period.
This page contains information about Etheria (2005).
One mistake and you'll disrupt our history.

Avria is a fictional character from the Filipino fantasy-themed television saga Encantadia produced by GMA Network. She appears in Etheria as one of the major antagonists and Encantadia: Pag-ibig Hanggang Wakas as one of the antagonists.

Avria is a Queen of Etheria in Encantadia and concurrently the head of Hera Andal. She is the adoptive mother to Minea and wife to Memen of Hera Sensa. She's also a sister of Arkrey, who was a traitor to the Sapiryans and to Lip-aya. Though little is known of how she was able to ascend the throne, it is clear that she is the only one who has access to their Bathaluman (Goddess), Ether, as the Goddess doesn't even know that Avria's predecessor has passed the throne to her. Avria was made Queen of Etheria and married Memen, she needed an heir however, she could not produce one so she sought the help of Ether; she told her to seek the help of Barkus. They took a daughter of a Diwata who was written in the prophecy that would one day be a queen. Barkus helped in covering up this incident by telling everyone Avria went away to prepare for her childbirth while the whole truth was she just hid and waited for the right time to come.

When Memen left her for Ornia, her pride and strong sense of duty to the crown forced her to order a massive manhunt for the two fugitives. When she learned that the two were hiding in Sapiro (Adjantao, to be specific), she ordered the Heran Animus from Hera Sensa to assassinate the two in exchange for healing Odessa of Hera Aega.

Just before she was crushed by a pillar, she unleashed a curse upon all of Encantadia: When the last member of her daughter Mine-a and her husband Memen's bloodline is born, Etheria will again rise to power and conquer all of its enemies ("Isinusumpa ko, na gumuho man ang Etheria ay muli itong babangon upang maghiganti sa kanyang mga kaaway. Isinusumpa ko, sa ating Bathalumang Ether, na muling babangon ang Etheria sa sandaling isilang ang huling dugo ng aking anak at asawa".) However, when the Sang'gres changed the past this never happened, Avria was the one who killed Memen instead and Andora was the one who murdered Ornia.

Avria is considered Danaya's arch-rival, as they are both the current queen of their queendoms at the time, and they also have very volatile tempers.

In Book 3, Avria, along with her fellow Herans are revived by Ether and went to the present-day of Etheria. She's also responsible for the abduction of Odessa's newborn child with Ybrahim/Alexus, Arman. Avria, disguising as a dama, secretly reads the history about the feud between Pirena and her fellow sisters and she plans to use Pirena to dissolve the unity of the Sang'gres once more. Through Ether's illusion magic, Avria soon infiltrates Lireo and eventually manages to replace Queen Danaya, after stealing her form and the Earth Gem. As Danaya, she manipulates the other Sang'gres, encouraging Pirena to rebuild Hathoria, while deceiving Alena and Amihan that Pirena has returned to her wicked ways. She also sided with the revived Hagorn.

In her disguise as Danaya, she enchanted Arman to grow up fast so that he would be useful to her for future plans. She tricked the grown-up Arman into thinking that Ybrahim and the Sang'gres killed his mother, Odessa. The truth was that Avria herself killed Odessa, in order to keep her from revealing to Arman that Ybrahim was in fact his father.

Avria and Ether battled Danaya and Pirena and later she is stabbed to death by Danaya.

As queen of the Etherian Empire, she rules over her dominion with an iron fist, binding herself to the throne she had long aspired to. Avria does not hesitate to mete out punishment for as long as it serves the empire.

Yet for all her apparent ruthlessness, Avria has also been shown to be capable of utter devotion, in particular to her husband Memen. His betrayal cut her to the core and engulfed all of Encantadia in its first great war.

The Kabilan- The Kabilan was formerly owned by Ether, and then kept by Avria. It was later used by Hagorn in the present-day of Encantadia.

Avria's blade - she carries her personal red blade aside from Kabilan.

Francine Prieto seeing her photos on the wiki.

Francine Prieto (wearing sky blue) with some of the casts of Encantadia 2005 and 2016. 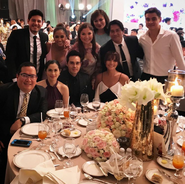 Francine Prieto (wearing sky blue) with some of the casts of Encantadia 2005 and 2016.

One of her outfits in the 3rd Book.

Add a photo to this gallery
Retrieved from "https://encantadia.fandom.com/wiki/Avria?oldid=41577"
Community content is available under CC-BY-SA unless otherwise noted.