In every ending there is a new beginning
This page contains information about Etheria (2016)
A new threat has come to challenge the current rulers of Encantadia.

"Cassiopea" (after using body as her soul's temporary vessel; formerly)
"Danaya" (after taking over Danaya's body to fool the Diwatas; formerly)

Slain by the Diwatas during the war against Etheria (first death; as Ether said)
Body was split into two parts by Hagorn after being sent to the past and the present at the same time using the Ginintuang Orasan and the Portal of the Past in Lumang Etheria (second death)

Hara Avria of Etheria was the main antagonist of the Philippine television fantasy series Encantadia produced by GMA Network. She was portrayed by Eula Valdez.

Avria is the queen of the fallen kingdom of Etheria and is the queen of all its Heras (tribes). She is also the main leader of her tribe, which is Hera Andal - the tribe of Etherians who possess greater power and knowledge in healing arts, black magic, and other forms of sorcery, among others.

After the fall of Etheria, Avria's remains were kept and guarded by Emre's soldiers from Devas. However, centuries after, Ether visited her tomb and killed the soldiers with her powers and fighting skills even with the solders fighting back, keeping her remains. Once the soldiers were defeated, Ether opened her chest of remains and poured her blood into her remains, restoring her soul and resurrecting her.

Alongside Ether, they went to Cassiopea. With the power of Ether, she possess the body of the powerful diwata. Ether then introduced her to her risen queendom which is rebuilt in a far unknown land to the diwatas (shown as the restored Hera Andal). Under the guise of Cassiopea, Avria manipulates the Sang'gres into believing that she is their ally. During her first encounter with the Sang'gres, she taunts them with their past, causing the Sang'gres to speculate that something wrong is happening with Cassiopea. However, knowing about Cassiopea and the Sang'gres relationship as states by Ether, she started to act like Cassiopea as an order given by the Bathalumang Ether in order to deceive the diwatas and to hide the fact that she is just possessing Cassiopea's body. She, alongside the resurrected bodies of Asval, Hera Andora of Hera Sensa in Agane's body, Amarro, LiraSari with her memory lost and character changed, and Bathalumang Ether they then rebuilt the queendom of Etheria in having new servants and new soldiers by controlling the minds of the encantados to fight for Etheria against their free will. When an army of encantados was built, Ether sends Avria to take all the elemental gems by pretending to be Cassiopea and asking the Sang'gres to give back all the gems to its original guardian. However, due to her flaw of not recognizing Mira and Lira when she attacked the young Sang'gres, this makes them believe that she is in fact, an impostor and not Cassiopea. Because of this, Pirena, under the guise of Mira, infiltrated the Andal castle to provoke Avria and to unveil her deceit once and for all. Avria, unaware that she is talking to (Pirena in disguise as) Mira, addressed her as Lira. This was a fatal mistake as she has fallen into the trap set by Pirena. In order to take all the elemental gems once and for all, she infiltrated the Lirean castle, killed all the Lirean guards that stood on her way and resurrected one and controlled his mind to lead her to the chamber. She managed to take two elemental gems, the Air Gem and the Earth Gem. However, Cassiopea defeated Avria's soul which abled Cassiopea to escape from her body used by Avria and took back all the gems that she stolen until she gained back her body.

With Ether seeing and knowing this, Ether ordered Asval to rescue and accompany her. With the help of Asval, she took the Spirit Gem and went back to the Andal Castle which made Ether angry that they weren't able to take all of the elemental gems, but was contented after, with even the one gem they successfully had. She then gave the gem to her Bathaluman. With her being just a resurrected soul, made her soul or spirit weak and severely defeated with the battle with the real Cassiopea. Because of this, Ether told Asval to make her rest and then ordered Andora to prepare her for her regeneration and place her in a sarcophagus. Using the Spirit Gem, Bathalumang Ether intended to heal all the wounds of Avria as well as to restore her body. Ether told Andora to use the Spirit Gem and her third eye power to aid her queen in her regeneration and total resurrection with Avria's original body after three days in her sarcophagus. With the Sang'gres knowing the truth about the real Cassiopea and encountering Andora and her allies in the Etherian palace, alongside Rama Ybrahim and Mashna Muros, they and the Haras Pirena and Danaya ventured again to the new Etheria to attack and stop Avria's total ressurection. With this happening, and with Andoraand her allies defeated by the gems of the Sang'gres (using the gems of fire and earth) and Rama Ybrahim (using Amihan's gem of air), Ether then speed up Avria's regeneration with her deity powers and staff so she can resurrect once more in her new body (portrayed by Eula Valdez). The Bathaluman aids the new Etherians by making a tornado to make Danaya, Pirena, and Ybrahim fly away. Once they return to the castle, Andora wished that her queen Avria will resurrect and fully regenerate as fast as she told her Bathalumang Ether. Ether then said that in order to do that, they need to offer someone as a sacrifice. Asval told Amarro to get one of their newly hypnotized ally to be the life sacrifice for their queen. Amarro thought twice about it, so Andora spoke at him if he will do it or not which made Amarro go to do the order. Amarro then came back with the sacrifice which is one of their newly hypnotized ally - a Nymfa, which then held by two Bandidos. Ether then used her to offer blood on the sarcophagus of Hara Avria where she is rested. The Nymfa's blood is offered and shed on top of Hara Avria's sarcophagus running down the sigil of the queen of Etheria which is a coiled-like form of a serpent (depicting Bathlumang Ether's cursed form), waiting for her (Hara Avria) to finally fully regenerate, revive, and totally resurrect.

Ether offered her blood as well on Avria's sarcophagus to even speed up more her total regeneration and complete resurrection, so she can come back fully resurrected in order to defend Etheria; also due to the diwatas and its allies are already venturing often and attacking them, before Bathalumang Ether turned into her cursed form - a serpent. Andora thought and hoped if Ether's added and offered blood would be enough for her coming back, so that she can be with them her faithful allies as soon as possible. Finally after, the sarcophagus opened which revealed Hara Avria's resurrected and revived body.

Plotting Her Revenge Against the Four Kingdoms of Encantadia

Ether is joyful of her resurrection as Andora greeted her with joy and pleasure. LilaSari then praised Avria for her beauty and Asval agrees with her and Avria thanks them for their sweet words but then tells them that she wasn't resurrected by Ether to hear their praises, she was back so that she can finally have her revenge on the Diwatas and those who rule Encantadia. The Mashnas then prepare the Etherians to praise Avria and welcome her as a fully regenerated Queen. But Avria then shouts at them and tells them their number will be rendered useless for a battle and asks the generals to go and find more encantados to be the new Etherians. Amarro doesn't move until Avria addresses him and tells him to go, he then asks pardon and leaves. Avria then tells Ether that Amarro doesn't seem loyal to Etheria, Ether tells her to let him be for a while because they can still use him for something. 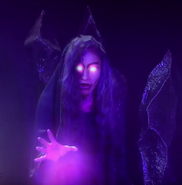 The Ivtre (soul) of Avria
Add a photo to this gallery 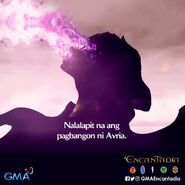 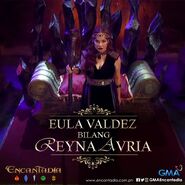 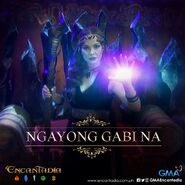 A poster showing that Avria's Debut is tonight.
Add a photo to this gallery

Retrieved from "https://encantadia.fandom.com/wiki/Avria_(2016)?oldid=41076"
Community content is available under CC-BY-SA unless otherwise noted.