Azulan is a fictional character from the Philippine fantasy television series, Encantadia. He is known as a Punjabwean warrior from the tribe Punjabwe in Sapiro. He is played by Marx Topacio.

Azulan is Punjabwean man from the Land of Punjabwe, a tribe not far from the kingdom of Sapiro. He is known as a great warrior of their tribe and also the older brother of Ariana. As a man of their tribe, his duty is to create metal weapons for the Punjabwe as well as to protect their women (including their sister) against any enemies.

Accompanying Rehav Manik to His Betrothal

As the Rehav of the Punjabwe Rehav Manik came to their village to look for a suitable wife of his own, Azulan, being the leader of the men, presented him some of the women from their tribe for the Babaylan to choose which one of them will be his betrothed. The young women were then let out from a small hut and presented themselves to the Rehav. One of them was Azulan's younger sister, Ariana, which Manik already have feelings for before. The ceremony then commenced, with the Babaylan asking Punjabwean prince to put the metal ball inside a machine which has different pathways and holes that leads to a Punjabwean woman. Whoever receives the metal ball will be his soon-to-be wife. Eventually, the ball fell into Ariana's hands, and their betrothal was then declared by the Babaylan. As seen from her face, Azulan saw how her younger sister was not happy from what happened.

Afterwards, Azulan saw Ariana in a corner of a hut, crying and reflecting to what is going to transpire soon. He asked his sister if she is alright, but Arina wondered why she has to marry someone that she does not like, or for that matter, she does not love at all. Azulan then explained to her the reason; that Manik is a powerful and skillful Punjabwean that can protect himself, and soon, Ariana from any enemy. However, Ariana questioned why she has to depend her safety to Manik and if she cannot just let Azulan teach her how to handle a weapon so she cannot do the marriage anymore and just take care of herself. He informed them of their customs and traditions, that women in their tribe have no right to be warriors or even hold a sword, for their duty is to be married to their men so they can give them children that will protect their tribe and their land in the future. After hearing all of this, Ariana ultimately agreed to her older brother and finally accepted her fate as Rehav Manik's soon-to-be wife.

As the two siblings returned to where Rehav Manik was, they were told by the Punjabwean Prince about some strangers he saw down the plains. It was the new Etherians and their leaders Hera Andora, Asval, Amarro, and LilaSari, who had been planning to invade Punjabwe and capture their men for them to convert as their new soldiers. It did not last long as they finally attack the village, raiding them and taking their men as captives. As the trouble was going on, Azulan instructed Ariana to hide from one of the huts so no one could see her or even hurt her.

Manik and Azulan then tried to fought the enemies, but they were no match for the Etherian forces, for they were too powerful for them, and they were also defeated and captured by Amarro and Asval, respectively. Eventually, Hera Andora was raiding one of the huts when she saw Ariana, hiding. She took her outside and put a sword on her neck. As the Punjabwean men were about to be taken away as Andora ordered, Ariana talked back, saying they cannot let them and her brother go. Azulan then told her sister not speak of anything anymore so she will not get hurt, but the defiant Ariana took Andora's hand off her, causing the Heran to slap her and falling to the ground. Despite Azulan's warnings, Ariana still fought the Etherian by wielding an axe against her, but it proved useless, and she was finally stabbed in the abdomen by Andora, wounding her.

Azulan, seeing that his sister is slowly dying, struggled to let go from his captors (which he eventually did) and approached Ariana. Gasping for life, Ariana called her brother's name, and cried desperately for she cannot breathe. Moments later, Azulan's sister finally succumbed from her wound, killing her instantly. Angry about Ariana's death, Azulan tried to once again attack the Etherians, but it was futile, for Asval quickly knocked him unconscious. Afterwards, Azulan, along with Manik and the rest of the Punjabwean men were finally taken away by the Etherians from Punjabwe, leaving their women and children behind, including Ariana's dead body.

Fighting to Escape Alongside Manik

As Azulan, Manik, and the other Punjabwean men were lead away from their land, the Etherians commanded them to pay their respects to their new Mashnas. As they were talking that they need to find more Encantados to capture, Manik and Azulan struggled from their captors and did all they can to escape their crutches. However, they failed to do so and Manik was caught by Amarro, while Azulan was apprehended by Asval. The Mashna suggested that Hera Andora should use her power against them in order for them to calm down. They were about to do it with Azulan first (because Asval already wants to kill him because of his defiance), but the Heran unfortunately informed them that there is a limit to how many minds or beings she can invade, and that only their Hara could have a limitless power.

As they were talking, the Hathor soldiers (who were captured as well), broke free from the Etherian soldiers and eventually ran away. With Asval and Amarro going after them, and Andora and LilaSari distracted, this gave Azulan and Manik the opportunity to free themselves from the weak soldiers. Manik eventually fled from the soldiers, but Azulan was cornered by LilaSari after being hit in the abdomen by her weapon. Andora declared that the Punjabwe was a rebel for giving them so much trouble, and does not want him to be with the Etherian Army. Therefore, the Heran decided that Azulan must die.

As Andora was about to finally finish Azulan, someone has fired a distraction shot between LilaSari and the Heran. Before they could see the being, another shot was fired, causing them to fled. As Azulan turned around, he saw that it was Ariana, his sister whom he thought to be already dead. He asked how did this happen, but before she could answer, the two Mashnas returned to Ariana and Azulan and cornered the two Punjabwes. They were held again and about to be killed, but a Diwata arrived to stop the Etherians.It was Sang'gre Alena, who has seen the commotion as she traveled along the forest. She then asked the two to finally walk away, for she will handle them herself. However, the Sang'gre fell to the Heran's powers and controlled her mind. Ariana saw that she was on trouble, so she asked her brother to help her. Azulan then fired a shot against the Heran, who lost control of Alena and defeated them. The two Punjabwes meanwhile, finally escaped the wrath of Andora and the other Etherians.

Journey to Lireo with His Sister

Arrival in the Palace of the Diwatas

Encounters with the Hara of Hathoria 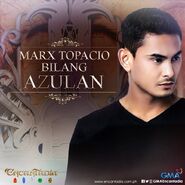 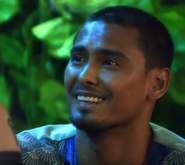 Add a photo to this gallery
Retrieved from "https://encantadia.fandom.com/wiki/Azulan_(2016)?oldid=34089"
Community content is available under CC-BY-SA unless otherwise noted.