You cannot hide from my eyes. My eyes see everything, you're not from this time period.
This page contains information about Etheria (2005).
One mistake and you'll disrupt our history.

Barkus is a fictional character from the Philippine telefantasya Etheria, which is a prequel/sequel to the highly rated Encantadia. Barkus is played by Filipino actor Tirso Cruz III.

Barkus is the leader of Hera Sensa and father of Animus and Andora. Barkus despises Animus and Andora because they were the cause of the death of his wife. Conceiving twins results to bad luck in Etheria.

Barkus is also the half brother of Memen, husband of queen Avria, and the guardian of the tree of life Evades. He has the power to control other people's minds to make them do his will, even to kill themselves. As the leader of Hera Sensa he also enjoys the position as one of the advisors of Queen Avria of Etheria.

Barkus did not appear in Encantadia.

Barkus did not appear in Encantadia: Pag-ibig Hanggang Wakas but made a cameo appearance via flashback in the credits of the final episode. 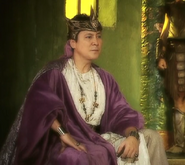 Add a photo to this gallery
Retrieved from "https://encantadia.fandom.com/wiki/Barkus?oldid=41572"
Community content is available under CC-BY-SA unless otherwise noted.