Brilyante ng Hangin is one of the four elemental gems manifesting the element of air.

Abilities granted to its Keeper:

So far, the known abilities that the gem grants its keeper are:

Amihan creates a tornado as the kickoff of their army on the second war against Hathoria.

Amihan tries to reach her daughter and send her a message using the powers of the gem.

Amihan makes Lira feel her love through the air.

Amihan used the gem to take away all the air within every Hathor's body. Mira is one of those affected of her incantation.

Amihan used the gem to know if the Lirean soldiers are still alive.

Amihan flew to the sky to search for Lira.

Amihan is able to free Ybrahim, Aquil, Muros and the other soldiers of Lireo from the chains.

Amihan used the gem's ability to remove the poison within the bodies of their allies.

Avria puts out the fire on the castle of Hera Andal.

Amihan scares the Hathors with her eyes glowing hinting that the gem also grants laserbeam but was never seen in the series.

Amihan protects herself using the gem enabling her to embrace Pirena without getting harmed. 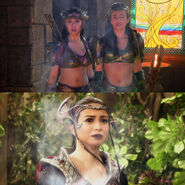 Timeline of the Gem's keepers

The Brilyante ng Hangin was first kept by Cassiopea after she divided the Mother Gem.

The Brilyante ng Hangin was entrusted to Mine-a by Cassiopea as a share of the diwatas of the Mother Gem. The gem was first seen being used by Mine-a against Adhara. She commanded the gem to take away the air flowing in the entire body of Adhara killing her and sends her to Balaak. Mine-a also used the gem along with the other three gems to curse the Hathors. When not in Mine-a's possession, Mine-a would keep the gem in a guarded chamber along with the other three gems. Pirena tried to take the gem away but it vanished, showing that the gem has a sense of security.

After the Gem of Fire was stolen, Mine-a decided it is best if she entrusts a gem to each of her daughters for safekeeping. Mine-a entrusted the gem of their race, which is the Gem of Air to her second-born daughter, Amihan, who later became queen. Amihan used it mainly for battle purposes and locating people. She held it unto her possession until her final moments. Because a gem cannot die with their current keeper, Amihan passes its ownership to Danaya to prevent causing casualty.

Before Amihan faces Hagorn, she commanded her Brilyante ng Hangin to be with Danaya in the case that she would die. Danaya obtained the gem upon the death of Amihan. Although Amihan granted Danaya the ownership of the gem in her last will, Danaya never took it into her possession ever since the war.

Ybrahim became the gem's keeper for a while. As they needed someone to keep the gem for the time being. Ybrahim first kept it when they went to confer judgment to Cassiopea and he kept it once more to aid in the battle against Etheria.

Through the Brilyante ng Diwa, the gem was able to let itself be easily taken by Avria who switched forms with Danaya. Avria used it against the Diwatas, used it to easily get soldiers from the past, put out the fire Pirena had caused to the castle of Etheria and heal herself.

Abilities granted to its owner

The gem grants its owner with the power to control the air and wind. If the beholder already has this power, its owner's strength is heightened and diversified, enabling the person to control the air, wind and coldness. In this sense, the beholder can change air currents, conjure oxygen in areas without it and transform into the air itself. This gem is sometimes used to send messages to other people. The gem can also be employed in detecting the presence of nearby beings by tracing the sound of their breaths. Amihan used this power twice: first, to find Alena after the latter gave birth to Kahlil and second, to confirm the safety of Cassandra who ventured out with Wahid, Apek, and Wantuk to Devas.

Timeline of the Gem's keepers

The Brilyante ng Hangin was first kept by the Diwatas when their Queen Cassiopea divided the Brilyante ng mga Elemento though, she got banished from Lireo.

The Gem was given under the care of Mine-a, the queen of Lireo at that time.

When Pirena had successfully stolen the Gem of Fire, Mine-a realized it is no longer safe to leave the other gems in the sealed room. Thus, she entrusted this to Amihan. Amihan never lost possession of the gem ever since she became its keeper. Amihan used it often to locate the whereabouts of people.

Amihan flew up to the sky to try and catch up and interfere on the battle between Kahlil and Lira.

Amihan summons the Air Gem in the Third Book.

Add a photo to this gallery
Retrieved from "https://encantadia.fandom.com/wiki/Brilyante_ng_Hangin?oldid=41601"
Community content is available under CC-BY-SA unless otherwise noted.