The Gem of Water is one of the four elemental gems manifesting the element of water. Without this gem, Encantadia would experience drought and all of the animals who live in water would not last too long.

The Gem of Water listens and obeys whatever is the command of its keeper. However, when Alena asked the gem to create a tsunami to drown her, the gem didn't obey. This only means there is a limit to its obedience; the gem does not allow its keeper to use its powers to take away his/her own life probably because if its keeper dies with the gem still in his/her possession, the balance in the forces of nature in Encantadia will be disrupted.

Abilities granted to its keeper

So far, the known abilities that the gem grants its keeper are:

The Ivictus of the Keeper of the Brilyante ng Tubig.

Alena is able to create a shield that would deflect the flaming arrows.

Alena creates a huge surge in attempt to defeat the Hathorian Army.

The gem is ordered by Hagorn to turn the all the water in the waterfall into blood to threaten Amihan and the Resistance Army.

Pirena conveys to Amihan her message through the waterfall.

Alena is able to bind the enemy.

Pirena summons a large quantity of water and drowns Hitano.

Alena creates a shield as a temporary protection from their enemies.

Alena uses the gem to detect the whereabouts of Lira.

Alena uses the gem's ability to let its keeper know what has happened.

Alena preserves the bodies of the deceased tagapangalagas.

Alena confines themselves in a shield in order to keep their conversation private.

Alena created a bubble of water and directed its movements.

Ybrahim is saved by Alena through the bubble.

Alena asks the gem to give wisdom and clarity to everyone's minds in preparation for the upcoming battle.

The gem created a hollogram of the map of Encantadia.

Alena protects herself using the gem enabling her to embrace Pirena without getting harmed.
Add a photo to this gallery

Brilyante ng Tubig and Lupa
Add a photo to this gallery

The timeline of the gem's keepers

After the Mother gem was divided, Cassiopea took the gems and became its very first keeper.

The Brilyante ng Tubig was entrusted to Imaw by Cassiopea as a share of the Adamyans of the Mother Gem.

Arvak plotted to raise their race's standards by obtaining another gem. Knowing that Adamya is the most vunerable because it has no defense unit, he came to Adamya to take it from Imaw. As expected, Arvak easily got the gem without even having to put up a fight. Cassiopea then came to Hathoria asking Arvak to return the gem but Arvak used the gem's powers combined with the gem of fire's against Cassiopeia. It was enough to make Cassiopea retreat for not having any edge against the two gems. Arvak brought out gem along with the gem of fire to make Armeo surrender the Brilyante ng Lupa but before he was able to give a command to the gem he got shot by an arrow. Raquim immediately took the gem from him before he breathed his last.

After Arvak's death, Raquim became the gem's keeper he kept the gem until he arrived in Lireo.

Raquim brought the gem along with the other two gems to Mine-a, Mine-a then became its keeper she used the gem to curse Hathoria. When not in Mine-a's possession, Mine-a would keep the gem in a guarded chamber along with the other three gems. Pirena tried to take the gem away but it vanished into water showing that the gem has a sense of security.

After the Brilyante ng Apoy was stolen by Pirena, Mine-a decided it is best if she entrusts a gem to each of her daughters for safekeeping. Mine-a entrusted the Gem of Water to Alena. Alena used it once to kill herself by summoning it to create tsunami and drown her to death, due to depression of death of Ybarro, but it won't allow her to kill. Bathalang Emre showed up to Alena and asks to surrender the Gem of Water to Him in exchange of taking away all her sadness and depression and Alena willingly surrendered it. Bathalang Emre used to ability of the gem to wipe out all of Alena's memories. Alena also losed the possession of the water gem again during the Sapiro war when Pirena grabbed her arm and got burned due to Pirena's power given by the Bathalumang Ether. After a series of events, Pirena, after reading their late mother's (Ynang Reyna Mine-a) letter to her and coming to her senses. She eventually returned the water gem to Alena, as a sign of asking forgiveness to her.

After Alena lost her consciousness and it is revealed that it was not Bathalang Emre but Pirena in disguise. Pirena then became its keeper using it to aid her in battles, relay her messages to her enemies and create a protective barrier. After her father became her enemy, Pirena needed an ally so she summoned the kambal diwa of the Brilyante ng Tubig Agua. Pirena ordered Agua to look for Alena who was the keeper of the gem before her. Pirena burns Alena's arm and steal again the gem against Amihan to steal the throne of Sapiro and to make weakness of Alena and Amihan. However, after reading Ynang Reyna Mine-e's letter which is entrusted exclusively to her, she realized all of her wrongdoings and came to her senses, She returned the water gem to Alena as well as asking for forgiveness to her.

Hagorn asks Pirena to surrender the water gem to him. Pirena refused to comply so he threatened to get Mira in the mortal world and let them both feel his wrath. Pirena still stood up against his father and refused to surrender the gem. Hagorn showed the key to Asnamon Tree and requested Asval to get Mira in the mortal world. Pirena was shocked that he has it so she surrendered the water gem to Hagorn in exchange for the safety of her daughter.

After the forces of Amihan and Danaya decided to infiltrate Lireo and take it away from Hagorn's clutches, LilaSari used this opportunity to trick Hagorn thus stabbing him behind and then requesting Hagorn to surrender the Brilyante ng Tubig to her or else he will die. LilaSari wasn't able to make most out of the gem as its keeper other than fusing its powers with Danaya to become one being. Although LilaSari promised Alena she would give back the gem to her, LilaSari ended up giving it to Amihan instead.

When LilaSari wanted to have a low key life, she gave Amihan the gem. Not wanting to do anything with it anymore. Amihan becomes its temporary keeper until she gave it back to Alena upon returning to Lireo.

Alena upon regaining the gem allowed her to her armor once again during battles but her possessing the gem was short lived as Pirena tricked her to giving up the gem using her newly acquired powers from Ether.

Abilities granted to its keeper

Lira's hand got burnt by the boiling shield of water Pirena had created.

Alena is able to communicate with the clam.

Pirena sends a gigantic fish to go after Danaya and prevent her from obtaining her gem.
Add a photo to this gallery

The Brilyante ng Tubig was first kept by Imaw when Cassiopea divided the Elemental gem and gave the Adamyans their share. Imaw kept it in a small pouch bag that hangs from his neck. Arvak later attacked Adamya to steal the Brilyante ng Tubig which was shown as a solid gem. The gem was kept in a bag along with the two other gems collected by Arvak. Raquim managed to retrieve the gems and gave them to Queen Mine-a for safekeeping. Since then it was kept safe inside a sealed room in Lireo for many years. When Pirena had successfully stolen the gem of fire, Mine-a realized it is no longer safe to leave the other gems in the sealed room thus, she entrusted this gem to Alena. It didn't stay long in Alena's possession because Pirena tricked Alena by taking the form of Emre and asked for the gem. Pirena then became its keeper using its powers like summoning a sea monster and sealing Lira in a tower of Lireo. Alena managed to regain ownership of the Gem of Water when Pirena handed her the gem hoping she would be an ally of hers. Since then, the gem had been in Alena's possession. Using its powers against her enemies. In Pag-ibig Hanggang Wakas, Alena used its full power against the Ivtre Odessa resulting her second death. Later in the Book, Alena is forced to give up the Gem of Water to save Arman's life. Hagorn then became its keeper using it to strengthen the troops of Hathoria. When Hagorn willingly killed himself, he handed the gem to Pirena. She kept it until Armea's coronation. At the conclusion of the series, Danaya gave the gem to Armea and she became its new keeper. 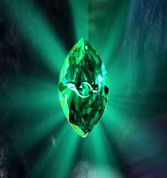 Alena summons the Water Gem in the Third Book.
Add a photo to this gallery

Alena receives the Brilyante ng Tubig in the 2016 requel.

Pirena using Brilyante ng Tubig after stealing it from Alena.

Pirena summons the Briliyante after she has once again obtained it.

Fusion with Brilyante ng Lupa.
Add a photo to this gallery
Retrieved from "https://encantadia.fandom.com/wiki/Brilyante_ng_Tubig?oldid=41592"
Community content is available under CC-BY-SA unless otherwise noted.