Encantados (except for the Etherians)

Bathala (expelled as an Encantado)

Rey Talosig Jr. (as a Bathala, faceless)
Zoren Legaspi (as an Encantado and the Bathala, with face shown)

Encantados (except for the Etherians and Hathors)

Bathalang Emre is one of the main characters from the Philippine fantasy series Encantadia produced by GMA Network.

Emre, Arde and Ether were originally angels who decided to remain neutral during the war between the good and bad angels. The victors were not impressed with their neutrality, and they were expelled from Heaven. They settled in an unnamed land which they claimed as their own; and they named it Encantadia.

Evades described Emre as a playful bathala. He sometimes disguises himself to test Encantados/Encantadas.

Emre, Arde, Ether, Keros, and Haliya saw how savage and dependent humans are, so Emre, alongside his fellow Bathalas, created the realm of Encantadia. He was worshipped by many Encantados, which made Arde and Ether jealous. The two planned to kill Emre. However, Emre saw through their plan. Emre was furious, he cursed the two changing their appearances. He turned Arde into a dragon and Ether into a serpent.

Getting His Powers Back from Arde & Restoring Devas

Being with Cassiopea in Devas

Emre is very powerful since he is the one alongside the four other deities: Haliya, Keros, Arde and Ether, who created Encantadia and all who lives in it. 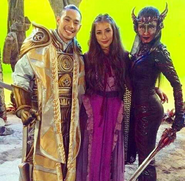 The man portraying Emre (Rey Talosig, Jr.) in a picture together with Solenn Huessaff (Cassiopea) and Janice Hung (Ether).

One of his disguises to test Lira.

Arde and Emre about to fight each other.

Illustration of Emre giving the Mother Gem to Cassiopea 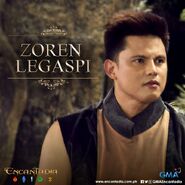 Promotional poster of Emre. (announcement of the role of Zoren Legaspi)

Emre in his gigantic form.

Emre exiled by Ether, Arde, and Keros as a regular encantado.

Emre turned back into a bathala, before restoring the Devas. 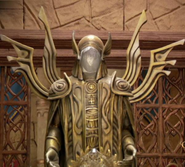 Emre as a Statue displayed in the Lirean Palace.

Emre's statue in Lireo.
Add a photo to this gallery
Retrieved from "https://encantadia.fandom.com/wiki/Emre?oldid=41542"
Community content is available under CC-BY-SA unless otherwise noted.