Fatally stabbed in the abdomen by Pirena.

Gamil is a minor character in the Philippine television fantasy series Encantadia produced by GMA Network. He is played by Ken Alfonso. He was previously unnamed; his name was first mentioned in the teaser for Episode 209.

Gamil is a Diwata; a Lirean soldier and Mira's father. After he was killed by Pirena after getting what she wanted from him, he was sent to Devas. He reappeared in the series as an Ivtre who escaped from Devas during its takeover by the Bad Bathalas.

When he was still a living being, he never showcased any powers or abilities; first of all because his appearance was only a cameo appearance, secondly because he is only a regular kind of Diwata. However when he reappeared in the series as an Ivtre he showcased these powers:

Upon Gurna's visit to Pirena in Hathoria, she informed her that Amihan is bearing a child that will surely be her successor to the Lirean throne. Pirena then came up with an idea so Amihan's child will be out of the way of her plans; on the same night she found Gamil sleeping in the Forest. Pirena woke him up but put him back to sleep again using red powder and they start having a collective session which forms Mira. After getting what she needed from him, he is fatally stabbed by Pirena afterwards.

In Episode 210, it was revealed that he along with Alira Naswen tried to save the blue blooded encantados from Devas when the Bad Bathalas tried to conquer it. But they were only able to take Kahlil with them. Ades then sacrificed herself to Ether, thus, making Kahlil, Alira, and Gamil escape. 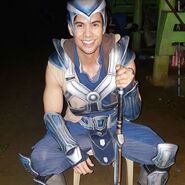 As he first appeared (in the teaser for Episode 209).

Gamil being enamoured by Pirena.
Add a photo to this gallery
Retrieved from "https://encantadia.fandom.com/wiki/Gamil?oldid=40573"
Community content is available under CC-BY-SA unless otherwise noted.