Fatally stabbed in the abdomen by Andora

Ivo Live, Encantadia (as an Ivtre)

Gilas is a character from the Philippine fantasy television series, Encantadia. He is known as a Nymfa from the Land of the Nymfas. He is being played by Jake Vargas.

Growing Up with Luna

Return to the Land of the Nymphs

Return to Lireo with Luna and Kina

Arrival and Training with the New Keepers 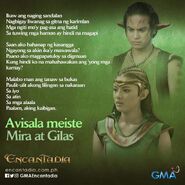 Farewell poem for Mira and Gilas.

Wiki background dedicated to Mira and Gilas.
Add a photo to this gallery
Retrieved from "https://encantadia.fandom.com/wiki/Gilas?oldid=40076"
Community content is available under CC-BY-SA unless otherwise noted.