Bathalumang Haliya is a fictional character from the Philippine fantasy series Encantadia produced by GMA Network. She is one of the ancient godess of Encantadia and the one responsible for creating the second moon that shines down on the world they created. She is portrayed by Filipina actress, Valeen Montenegro.

Haliya is a shy and introverted but good hearted goddess in Encantadia because of this nature she tends to avoid contact with other encantados and possibly other Bathalas, and if she managed to make contact with them, like Cassiopea, she will immediately leave their sight/teleport back to the twin moons. Prior to this, Haliya was often seen smiling this is due to the fact that an Encantado named Hamir gives her joy and makes her feel that she's not alone. After discovering that this was a lie and Hamir only used her to gain wealth, Haliya has failed to show a single smile since then.

Haliya is one of the Five Ancient and Elemental Bathalas of Encantadia that manifests to the element of Water. When they were sent to Encantadia, Haliya became unhappy and tried to go back to where they came from, but the gateways of her fellow Bathalas were closed against them. She tried the last of five gateways to the realm of the celestial beings but like her fellow Bathalas' it remained closed against her. So she just decided to reside on one of Encantadia's twin moons which she considers her Home of Meditation and Peace, there she declared herself Goddess of the Moons. She never lets that moon shine when darkness covers Encantadia. She oftentimes goes down to Encantadia to visit the Stream of Truth, her favorite Stream where she takes a bath because the water there is clean. She considers this place her home in Encantadia.

Emre is seeking help from her to take back Devas from the Bathalas Arde, Ether, and Keros. She is called by Emre as the Good Goddess.

Prior to her Debut Appearance

Haliya once loved a Sapiryan, that is why she gave him everything he desired and even entrusted to him the De-jar to ascend to the moon from Encantadia and vice-versa. But her love soon betrayed her, as he long has loved a Diwata and bore a child, which was LilaSari. Haliya went to the newly built home of Hamir, Sapiro. She vented out her anger by cursing their child to have a beautiful face that captivates people but if they look at it they would turn to stone and will soon perish and even her parents themselves won't be exempted from this curse. She then exclaimed that she never should have returned to Encantadia. She then decided to forget the witness of her failed love, the moon, and made a second one as her home of peace and meditation. That is why Encantadia has two moons and why she avoids contact with Encantados because she doesn't trust them anymore.

As a Bathaluman/godess, Haliya is a being that possesses tremendous powers.

Optional
Add a photo to this gallery 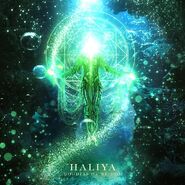 The Bathaluman decides to reside in one of the moons 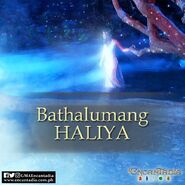 The poster teases that the Bathalumang Haliya will make her debut appearance tonight (Paghingi ep).
Add a photo to this gallery

Retrieved from "https://encantadia.fandom.com/wiki/Haliya?oldid=41266"
Community content is available under CC-BY-SA unless otherwise noted.