Deceased
Undead (Episodes 132-218) (as a Hadezar, later purified as an Ivtre in order for him to enter Devas)

Fatally stabbed in the back by Hagorn using his sword

Hitano was one of the high ranking officials in the Lireo's royal army. He died at the hands of Hagorn when he is in the mortal world but was later ressurected as an Ivtre hailed from Balaak. But due to his acts of heroism that benefited the greater good, he was later purified as an Ivtre and was accepted to reside in Devas.

Hitano is madly in love with Alena. He believes no one is worthy of marrying Alena other than him. He often spies on her when she goes alone in the woods to see if she is meeting another man. He often times acts as if Alena is his property even though Alena never established a relationship with him. He easily gets jealous at Ybarro for earning the affection of the Sang'gre he loves. This changed however, after meeting LilaSari and falling in love all over again.

Hitano is a handsome and tall diwata with a mascular body. He wears the Lireo Soldier uniform complete with the helmet. The only difference is he wears a brown shirt instead of a blue shirt. When he came back from Balaak as an Ivre, her armor seems to have change drastically, from wearing brown hoodie, he wore a black dressing cloth.

Hitano is a soldier who is often seen spying on Alena. This is because he is madly in love with the Sang'gre. He was so furious when he found out that Alena shows interest in Ybarro. Hitano personally went to the camp of the mandirigmas to tell Ybarro to stay away from Alena. Being unable to stop Alena from continuously seeing Ybarro, Hitano approached Aquil and asked for permission to talk to Ynang Reyna Mine-a. Aquil asked what is his reason and Hitano tells him he wants to seek for Alena's hand in marriage. Aquil tells him it's too sudden and they just finished fighting in a war. Hitano tells him they needed to get wed as soon as possible because Alena has fallen for a low class mandirigma. This information made Mine-a and Amihan worried. Amihan asks Hitano to bring her to the mandirigma Alena is in love with. Upon arriving there he points at Ybarro but Hitano didn't get the confrontation he expected. He never expected the time would come when Ybarro ended his relationship with Alena. Hitano thought Alena would finally requite his unrequited love but Alena never lost her feelings for Ybarro so Hitano hired a taong-puno named Burak to spy on Ybarro. Burak returned with the information Hitano became alarmed of, Ybarro is the long lost son of King Armeo which would make him be favored of marrying Alena. Hitano made a resolve to get rid of Ybarro before Alena would know about this.

Amihan and Aquil helped Lilasari, Hitano and an infant Deshna move to the mortal realm to live a peaceful life, however, Aquil somehow betrayed Lireo and gave Hagorn the information where Lilasari and Hitano lives. Hagorn led a search party to find his missing daughter, he eventually found the couple and stole his child, killing both Lilasari and Hitano in the process.

It is shown in the final episode that Hitano's ivtre eventually got accepted in Devas for all the good he has done for Encantadia.

Skilled Combatant - Hitano is undoubtedly one of the most skilled warriors in the Encantadia universe. Being part of the Lireo's Royal Army, he is intensively trained in art of combat. He was shown to be able to fight with his sword, as his primary weapon in combat. Hitano appeared to have good sense of aim and dexterity when he was shown to be able to throw a spear, fatally injuring a dragon to save Danaya and Alena. He was also shown to be able to hold his own, fighting many enemies at once.

Ivictus - When Hitano came back from Balaak, like any other Ivtres, he is now able to use Ivictus to transport himself and other people to places without traveling by foot.

Longetivity and Protection - As an Ivtre, Hitano cannot be harm by normal beings such as encantados and alike. He can never be killed by using natural means. The only exception to this kind of immortality is he can be killed if an Ivtre like himself will do the last fatal blow. 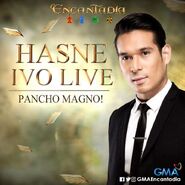 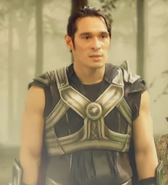 Hitano reminiscing his memories together with LilaSari.
Add a photo to this gallery

Hitano's new clothes, when they arrived at the Human World.
Add a photo to this gallery
Retrieved from "https://encantadia.fandom.com/wiki/Hitano_(2016)?oldid=41249"
Community content is available under CC-BY-SA unless otherwise noted.