Sang'gre Kahlil is a recurring character in the 2016 Philippine fantasy series Encantadia produced by GMA Network. He is portrayed by Avery Paraiso.

Kahlil is the offspring of Alena and Ybrahim/Ybarro.

Although Kahlil looks like an adult, he actually has the mind of a child. He thinks and acts like a child. He likes animals and is shown to be confused most of the time. When he talks to Emre in Devas, he is shown to be kind when he saw Lira being kicked out of the Palace of Sapiro.

Kahlil was born in the seashore of Encantadia. His mother, Alena, blessed Kahlil to make him remember his name and that he is the son of Alena and Ybarro. At noon, he grew up as a grown up man and two encantados saw him. They found him wearing only his mother's cape, so they gave him a pair of clothes, they asked him whether he needs any help from them.

He tells them he is Kahlil the son of Alena and Ybarro. One of the Encantados thought he wasn't in his right state of mind and gave him clothes to wear. They told him to go back to his home because a lot of Bandidos and Hathors are lurking around the place. When he left the seashore and lurked around at the forest, he was approached by Hitano asking who is he. Kahlil replied that he is Kahlil and he is the son of Alena and Ybarro.

Hitano didn't believe that Kahlil is the son of Alena and Ybarro, so he started attacking him. Kahlil fought back. LilaSari and a group of female prisoners happen to arrive at where Hitano and Kahlil are, so LilaSari immediately protected Kahlil, by immobilizing Hitano with her staff. The other female prisoners used their staffs to prevent Hitano from getting up. Kahlil began to escape from them.

Cassiopea tried to prevent what is destined to happen but Bathalumang Ether appears and tells Kahlil to run away as far as he can, far away for he not to be reached by Cassiopea's power. As he is lurking around the forest once again he sees Awoo and tells him that he is Kahlil, the son of Alena and Ybarro, then Awoo hears something so he goes away. Ether appears and gives Kahlil a snake bracelet which can prevent Cassiopea from seeing him and his present and future actions. King Hagorn and the Hathors were lurking around the woods when Ether appeared to them. Hagorn asked her what she wants, then Ether commanded them to find an encantado named Kahlil and bring him to safety.

So Hagorn and the Hathors did what the Bathaluman asked them. He was sent to Lireo and kept under custody. Pirena later found out that he is the son of Alena and Ybarro and was happy to know. Pirena gave a blessing to Kahlil through the use of the Brilyante ng Tubig to be a skillful fighter and the rightful encantado to kill Lira in the future. Cassiopea knew that this would happen. Pirena and Kahlil went into a training to test Kahlil's fighting skills.

Kahlil's face off with Icarus, Aquil and Danaya in the resistance camp.

In the end of Paghimok, he is shown entering the resistance's camp when Icarus said Kahlil is the person they are supposed to fight. He meets Danaya, but they don't know each other. The face off continues in Engkwentro. Aquil manages to immobilize Kahlil. Danaya asks who he is, Icarus replies that he is the son of Alena.

Danaya find it hard to believe what she just heard so she asked Kahlil once more. Kahlil tells her he is the son of Alena and Ybarro. He manages to break free from Aquil's clutches and stabs Aquil. He then tries to attack Danaya but Muros shields Danaya receiving the stab meant for her. Luckily in the gem's spirit guide form aids them.

Danaya then summons the Brilyante ng Lupa and gives Kahlil and Icarus to run. Having finished their business with them, the two leave the camp.

Danaya picks up the green robe belonging to Kahlil and summons the Brilyante ng Lupa. She then commands it to let her feel if he really is the son of Alena. Danaya then sees the flashbacks of Alena giving birth to Kahlil up to his immediate growth. After seeing those flashbacks, Danaya confirmed Kahlil is indeed Alena's son.

Kahlil meeting his father for the first time, unknowingly

Just as Ybarro and Wahid were travelling from Sapiro, a group of Hathors appeared. As they were fighting the Hathors, Kahlil appeared. Ybarro asks if he is an ally or an enemy but Kahlil attacks him. Ybarro manages to stab Kahlil not knowing he is his son.

Kahlil returns to Lireo and tells Pirena about what happened to them. Pirena tells Kahlil it was such a pity that his own father is the one who hurt him. Kahlil asks the meaning of the word "father" to which Pirena replies, even if he knew the meaning he still wouldn't understand. Pirena orders the dama attending to Kahlil to make him sleep.

Danaya and Ybarro appear asking the whereabouts of Kahlil. Pirena just smiles and tells her she only wants to speak with Ybarro. She hand over Kahlil but in exchange, he will present to her one of the gems being kept in their camp.

Kahlil watches a dama with her child. Pirena asks why he hasn't slept yet. Kahlil tells her his mother's name "Alena". Pirena apologizes because she doesn't know the whereabouts of Alena either.

Ybarro is already in front of Pirena. Pirena asks what gem will he present to her. Ybarro tells that the gem he will present her is neither of the or but a gem that is equally powerful. Pirena recognizes it is the . Pirena tells him to hand it over but Ybarro refuses and tells her to hand over his son. Pirena tells Gurna to go fetch Kahlil. Upon their arrival, Ybarro was prepared to hand over the gem but Danaya appears and snatches the gem. She then disappears with Ybarro. Pirena knows they haven't left yet and asked them to appear. Danaya and Ybarro appear behind Kahlil and Gurna. Gurna gets pushed away and Kahlil was taken with them.

Kahlil in the resistance's camp

Ybarro shows Kahlil around their camp. He then introduces himself to Kahlil as Ybarro, his father. Kahlil asks about his mother. Ybarro talks about Alena to Kahlil before their conversation got interrupted upon the announcement that Pao Pao is nowhere to be seen.

In Pagtulong, the episode ends when the scene focuses on Kahlil who is sleeping and the silhouette of Ether was shown at the tent.

Meeting Lira for the first time

He has met Lira once, in Pagbalik. Even though he is tasked to kill Lira, he instead, held her shoulders firmly and protected her by blocking Asval from taking her. The reason why he did that is unknown. When Hagorn knew that Kahlil let Lira escaped, he poisoned Kahlil's mind by telling him that Lira might kill him if he doesn't kill her.

From Nagbabadya to Peligro, he sworn his allegiance to Hagorn.

Kahlil tries to kill Lira but killed by his aunt Danaya.

Watching Lira from Devas with Emre

Kahlil and Emre has just watched Lira being taken away from the Palace of Sapiro, as ordered by Danaya. He tells Emre that he feels sad for Lira. Emre guessed that the next thing Kahlil wants to say is that he wants Emre to help and save Lira. Kahlil said that no one helped and saved him (during times of trouble) when he was alive. He mentioned that Pirena and Hagorn used him, and he doesn't want Lira to go through what he has gone through, when no one is to be trusted and to be allied with.

He feels that he has gone through a lot when he was still alive, so that's why he wants to help Lira. He asked Emre to aid her in her times of need. Emre replied that in times where there is danger and trouble for the people who are alive, he is there to help and show a way on how they will learn to be strong and wise.

Watching Mira from Devas with Emre

To Be Added and Confirmed.

Watching Lira, Wantuk and Wahid from Devas with Emre

In Pagsalakay, Kahlil was happy and told Emre that Lira has achieved her goal to reach Devas. Emre told him the people who will be able to go to Devas must be able to overcome the enemy.

Meeting Lira after a long time

In Salubong, as soon as Lira gain consciousness, Kahlil stepped in and told Lira to let him introduce who Emre is. Lira soon got shocked and said about him being dead and him being the enemy. He told her she shouldn't be scared.

Enchanced Development/Ability Intuition/Combat Perception - Pirena, with the use of the Gem of Water blessed Khalil to be able to learn different fighting techniques so he can possess the strength and skills of a true Warrior despite having a mind of an infant. Even with no formal training and possessing a mind of a child, he was able to cope up and fight head-to-head with very skilled warriors such as Hitano and Amarro. When he became an Ivtre, Khalil seemed to be more agile and skilled as ever, now that his mind is now matured and also emotionally stable.

Special Protection - Like Lira, Khalil was blessed to have a protection against all weapons that can be seen in Encantadia during its inception. And since the Avatar, Lira's sword was created after the blessing was placed down, it its the only weapon capable of killing Khalil.

Enhanced Speed - Khalil has been shown to have above average speed, which he uses to fight many Hadezar and avoiding all of their attacks.

Ivictus - Being half Diwata, it can be assumed that he also possess the power to transport himself and other people to other places without having to occupy and travel the space in between in physical form. But when he was still alive, this ability was never shown until he became an Ivtre(which most Ivtre's have the power to use Ivictus)

The snake bracelet, given by Ether. 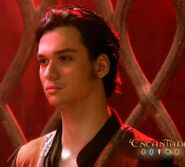 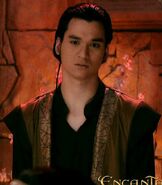 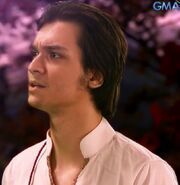 Retrieved from "https://encantadia.fandom.com/wiki/Kahlil_(2016)?oldid=41181"
Community content is available under CC-BY-SA unless otherwise noted.