Soul was fatally taken away by the Bathalang Arde

Ian De Leon (as the Bathala)

Bathalang Keros is an antogonist in the television fantasy series (locally known as telefantasya, Encantadia, produced by GMA Network. He is one of the five Ancient Bathalas of Encantadia that was once exiled by Emre, Arde, and Ether because of his ability to destroy and demolish intentionally or unintentionally.

Keros has a gray complexion and he has blue fire all over his head. He wears a red jumpsuit(?).

In Episode 149, Keros is identified as one of the five Bathalas that were expelled from the realm of the Celestial Beings and was sent to an empty world which they decided to name, Encantadia. But he and the other Bathala/Bathaluman became bored and left Emre, Arde, and Ether alone.

But in Episode 184 his story changed, he didn't leave out of boredom anymore, he was instead banished by Emre, Arde, and Ether from Encantadia because he breaks and destroys any being or thing even if does not mean to. So, he chose to live in an island—a dead island separated from Encantadia named Binyaan. And the fifth Bathala (later revealed to be named Haliya), became unhappy and chose to live on one of Encantadia's two moons.

But centuries after that, he was fetched by Arde and Ether and teamed up together to defeat Emre and take over Devas. He, together with Ether and Arde closed the gates of Devas and didn't let a soul in or out, imprisoning the ones inside. 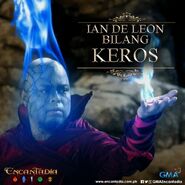 Bathalang Keros' Promotional Poster
Add a photo to this gallery

Retrieved from "https://encantadia.fandom.com/wiki/Keros?oldid=34323"
Community content is available under CC-BY-SA unless otherwise noted.