The Lagusang Panghimpapawid (or the Portal in the Sky) is another portal/passageway from the Mortal World to Encantadia or vice-versa. This portal was introduced in the episode Kakayahan. Since this portal is found in the sky, this portal is only used by the Mulawins because no other creature can withstand the intensity of the strong winds in the sky.

This portal probably existed in Encantadia (2005) but wasn't explored as the Mulawins were able to cross between worlds without needing the Asnamon Medallion.

The portal was unlocked by the Minokawa when it soared high in the sky to escape Pirena which brought it to Avila. The portal was also used by Almiro, Anya, Pagaspas, Lawiswis and Malik to go to Encantadia (Earth 2). They arrived in Hathoria wherein they were ambushed by the Hathors. Hara Pirena quickly comes to their aid and together, they kill the Hathors.

Gallery of Arts and Concept Arts

The portal as seen at the Mortal Realm.

Artwork of Sir Noel Flores of Lakan about to go through the portal at the Mortal Realm.

The portal as seen at Encantadia.

Mulawins passing through the portal from the Mortal Realm to Encantadia. 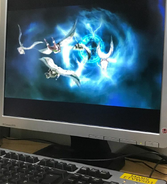 The development of the sky portal in MVR.
Add a photo to this gallery

Retrieved from "https://encantadia.fandom.com/wiki/Lagusang_Panghimpapawid?oldid=39428"
Community content is available under CC-BY-SA unless otherwise noted.