Petrification (When unmasked; now can be controlled, due to Ether's blessing)
Teleportation (as one of Etheria's [former] generals and as a Diwata/Sapiryan of Royal Blood)

LilaSari is a character from the Philippine fantasy television series Encantadia produced by GMA Network. She is played by Diana Zubiri who originally played the role of Danaya in the original series.

LilaSari is the daughter of Hamir, a wealthy Sapiryan who turned out to be Bathalumang Haliya's former lover.  It is assumed that her parents were the founder and also the Monarch of Sapiro. Making her have royal blood running in her veins.

LilaSari grew up to be a fearless Diwata because she was raised by Cassiopea. Despite being raised with love and care, she remained full of anger and hatred because of her curse. This was later changed however when she gave birth to Deshna she became a loving and protective mother, which also make her to join with the Diwatas.

Even during her infancy LilaSari's beauty was already evident. Her beautiful face captivated any Encantado/Encantada who saw it. However, because of the curse the Bathalumang Haliya bestowed on her when she was newly born (which was not known by everyone), Cassiopea had to hide her face using a mask. No one was able to appreciate her beauty as she grew up. When her mask was removed, it was finally revealed that LilaSari was indeed extremely beautiful; but the curse of her beauty ruined anyone who saw it even by using a mirror. Arde's gift paved the way for Encantados/Encantadas to appreciate her beauty without getting affected by her curse.

LilaSari wears a huge mask covering her head and face. When she was a baby, Cassiopea gave her a mask so that no one would be affected by her curse.

When she was unmasked, she had long black hair tied in several braids and brown eyes.

In her initial appearance, she wore a golden brown warrior armor-like dress with a sleeveless maroon undershirt with a pale yellow collar and matching armor boots.

When she sided with Adhara and after capturing Lira, her mask was no longer huge. She wore a different brown half-mask with silver chains hanging loose on her mask to show half her face. Currently, her warrior armor is now dark brown. A black short sleeve turtleneck is worn beneath her armor. She also wears black tights and dark brown armor boots. On her forearms she wears dark brown gauntlets similar to Adhara's and her hair is loose with several braids.

When she became the Queen of Lireo due to Hagorn's marriage, she wears a gray and black long dress with brown outlines, her black short sleeves are long at the edge, she wears a vibrant brown obi with gold accents, her dress skirt has brown outlines and heels beneath the skirt of her dress. Her half-mask are now black with gold chains hanging loose on her mask. Her black hair is loose with two single braids in each sides on her head. She later wears the queen's tiara after Pirena's departure.

After her rebirth, pledged allegiance with Avria and being assisted by Amarro, she no longer wears a half-mask as her curse while being unmasked is lifted. She wears a black high-neck sleeveless gown with reddish brown outlines. Her hair is now in a ponytail.

Prior to her Debut Appearance

The Bathalumang Haliya once loved a Sapiryan named Hamir, but he fooled her because he loved a Diwata named Halisha, they had a child which is LilaSari (but that isn't her real name only Cassiopea gave that name to her) but Haliya went down from the moons to Sapiro and cursed LilaSari to have such a beautiful and charming face but every time someone looks at it they will turn to stone. Her parents then turned to stone when they looked at her. Later, the dama of LilaSari's parents then came to the room and went to the forests of Lireo bringing LilaSari with her.

LilaSari was born during the reign of Cassiopea. Even in her infancy, she was already recognized as a beautiful Diwata; however, anyone who sees her face would turn into a stone. Her birth mother allowed Cassiopea to adopt her for her own good. Cassiopea then gave her a mask so that no one would be harmed by the effects of her curse. Over time, Cassiopea trained her how to battle, but her way of fighting goes to the extent of killing her training opponents.

Upon maturity, LilaSari longed to become Cassiopea's successor. However, her nasty demeanor caused Cassiopea to turn her down as her next successor, unless she changed her ways. Hurt by Cassiopea's words, she went on a killing rampage the night Cassiopea was away. Cassiopea returned to Lireo, to only to find out that LilaSari was giving into her bloodthirst. Cassiopea then expressed her disappointment on her for she hoped that she would change the fate that's been written on her palms. They fought each other until dawn, but she ended up losing to Cassiopea. Cassiopea was left with no choice but to use the Inang Brilyante to send LilaSari to the Carcero, so that she will no longer hurt anyone.

After many years of being imprisoned in the Carcero, LilaSari was brought out to become the opponent of Adhara. During their fight, Adhara was able to convince LilaSari to stop fighting and join forces to escape Carcero. LilaSari trusted Adhara, thinking she cares for her, but upon hearing of her plan to use her for acquiring the throne of Lireo, LilaSari realized Adhara is no different than her adoptive mother. LilaSari betrays Adhara by stabbing her during her battle with Amihan.

Cassiopea tells LilaSari that she would help her look for Deshna however, as Cassiopea embraced her she sees a vision of the future that once LilaSari retrieves Deshna, Hagorn who has heard of the news ambushed her along with some Hathors while she was walking with Deshna. LilaSari tried to fight back but she was outnumbered. She tries to remove her mask but it was too late as she got stabbed by Agane first.

LilaSari's curse seems to have been uplifted upon her rebirth as she no longer wears her mask. She joins the forces of Etheria along with Amarro and Asval.

LilaSari came across Luna when their group was staying at the forest, and unknown to her, Luna was actually her daughter, originally named Deshna. Their conversation got interrupted by Amarro asking what was she doing there. After answering Amarro, she looked back at where they were but they had vanished.

Return of her memories

It was revealed that her parents were the founders of the kingdom of Sapiro and the curse was conferred by Bathalumang Haliya. She cursed her to become so beautiful that anyone who would look at her face will turn into a stone.

Due to her original royal heritage, it can be assumed that LilaSari was offered some kind of royal position in Sapiro, as she is seen staying there after the final battle with Hagorn and his forces.

Being a half-blooded and royal Sapiryan, it can be assumed that LilaSari possesses some qualities present and distinct only to her people, like Zoolinguanism - the ability to understand and speak animal language and as well as seismic sense - the ability to detect earth's minerals.

However, there are some abilities granted to her during life some of them are:

Stone Gaze - The ability to turn creatures into stone by having them look on her face/eyes. It was given to her by Bathalumang Haliya, as punishment for her father for betraying her. Originally, LilaSari cannot control this power as without cover, anyone who looks at her beautiful face will turn into stone almost immediately. So when Cassiopeia adpoted her, she created a helm that will keep LilaSari from having to harm anyone with her ability, then Adhara once forged a powerful mask that can also help lilasari reveal her face, but block her powers temporarily while she is wearing it. However, when Ether abducted LilaSari, and turned her into one of her generals, Ether, being a godess, removed the curse and gave LilaSari the power to use it at will. This power can affect any living thing except from the gods. And Hagorn who possess the gift of protection from Ether, the keepers of the elemental gem, and the Ivrtes.

Ivictus - A permanent gift from Avria. The power to move or teleport from one place to another without occupying the space in between. At first, her ivictus color was black, but when Avria died, it turned white.

Advanced Combat Skills - LilaSari, having to train under Cassiopea's tutelage, has gained a remarkable skill in fighting. She was seen to have weilded different weapons in the series like sword, The Kabilan, arnis, spear and an electric staff - all which is really good and knowledgeable on how to use them. But in the end, she chose to fight in the war using a pair of arnis, similar to Danaya. It can be worth-noting that she bested Danaya in an arnis fight, and was able to fight off hordes of Hathor when she assaulted Hagorn's turf. And probably, without Hagorn's increased strength and power, it is theorized that she can beat Hagorn in a duel.

Hasten Recovery - A rare ability to regenrate oneself even in a near-death situation.

1st Official Portrait.
Add a photo to this gallery 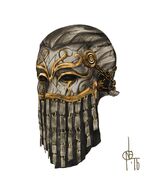 LilaSari's formal outfit concept (without mask).
Add a photo to this gallery 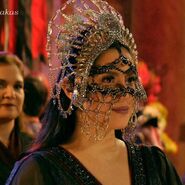 LilaSari as a queen of Lireo. 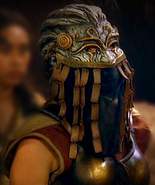 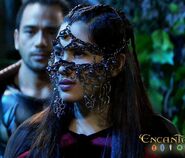 Fusion of Gems with Danaya

New armor outfit of LilaSari as princess of Sapiro 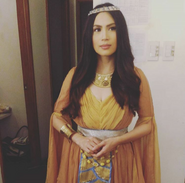 LilaSari as a Saprian Royalty.
Add a photo to this gallery
Retrieved from "https://encantadia.fandom.com/wiki/LilaSari?oldid=41681"
Community content is available under CC-BY-SA unless otherwise noted.