Encantada (Diwata/Sapiryan ethnicity)
Human (As perceived by the people during her stay in the Mundo ng mga Mortal)
Half Encantada, Half Sarangay (when she was cursed by Ether)

Avisala Lira at Mira (As an infant)
Pagkikita (As a teenager)

Sang'gre Lira is a major character from the Philippine fantasy series Encantadia produced by GMA Network. She is portrayed by Mikee Quintos.

Lira, known as Milagros or Mila in the mortal world, is the daughter of Amihan and Ybarro. When Lira was a baby, Pirena spirited her away to the world of mortals, swapping her own daughter Mira to be raised as Lira. The true Lira thus spent her childhood and adolescence as Mila, though she is aware of her true heritage.

When she was still an infant, Alena blessed her using the Brilyante ng Tubig to have a personality similar to the water element and that became the foundation why she came to be the Lira the people in Encantadia had knew. Despite losing her adoptive father to a tragic accident early in her childhood, Lira grew up to be a cheerful and kind young lady. Though she knows of her heritage as a princess of the Diwata and the future Queen of Lireo, her adoptive family's struggles have enabled her to be humble, hard-working, and resourceful. She also has a huge sense of humor making fun of anything despite how serious the situation is. When she was cursed by Ether (erasing everyone's memories about Lira), Lira told the damas in Lireo that she is the successor of Queen Amihan, she was just cursed that's why no one recognizes her but the damas just laughed, though Lira has a cool head and tells the damas that "salamat kayo hindi ako pinalaki ng Mamu ko na maging isang masamang tao!" Lira also has a strong faith in God she is always seen praying seeking for His help and guidance.

Just like her original counterpart, Lira has long black wavy hair and brown eyes. In a mortal world, she wears her casual outfit.

In her warrior form, her armor, greaves and tights are similar to Amihan in the 2005 series but has no sleeves and it was bulkier in appearance to make her wore a very heavy armor.

She wears a gold sleeveless armor with dark blue greaves with a long purple sash in each sides of her greaves resembling a cape, dark purple tights and gold and black boots. Her shoulder armor in each sides have purple accents and wears a matching gauntlets with purple outlines. She also wears a golden horned circlet with a design on her forehead and wields the Kabilan before it was taken by Adhara after her capture.

When she was casted upon a curse so that the Diwatas would not recognize her, she becomes a beastly appearance with two large horns downward in each sides of her head and her skin becomes pale.

When Lira ate the fruit from the Tree of Life her appearance turned normal though no one still recognizes her but her cousin Mira and friend Anthony from the Human World. When Amihan and her Allegiance got Lireo back, Lira was dressed like a dama, though her skirt is black and blue, which makes her outfit different from the other damas.

Her armor is similar to Alena and Danaya's current warrior form as the color scheme of her armor is blue and golden brown.

When she was killed by Asval, her outfit is just like her original counterpart's warrior form and the color appears as pale gold and dark brown and wears a matching dark brown tights.

Lira was Emre's answer to Mine-a's prayer for a successor to Amihan. Amihan conceived her from a collective dream she and Ybarro had. Lira was born just after Mine-a died from being shot through the back to the heart with a poisoned arrow loosed by Asval. The name Lira means diamond (brilyante) in Encantadia.

Lira's aunt Pirena also gave birth at roughly the same time as Amihan. As an act of revenge against her mother and sisters, Pirena planned to switch her own daughter Mira with Amihan's, so Mira can be the future Queen. Pirena came back to Lireo after Mine-a died, pretending to be contrite and remorseful of her past actions. In actuality, Pirena was planting the seeds of her revenge.

The return of Pirena discomfited Alena and Danaya, who thought it best to protect Lira from whatever danger may befall her. Danaya enchanted the infant with the ability to be shielded from any weapon made from materials taken from the earth.

Pirena took Lira from her crib and brought her deep into the forest, where she was seen by the Lambana Muyak. Pirena intended to kill the infant Lira with a dagger, but was stopped by Danaya's powerful enchantment. Because of this, Pirena decided to take Lira away to the human world and leave her there to die. Muyak followed them out of the portal into the human world, and has been stranded there with Lira since then.

Lira was found by Dado and Amanda, childless couple who adopted her as their child. Dado gave her the name Milagros, which means miracles. Since then she was known by her nickname Mila.

As a child, Lira discovered her power to teleport when she was about to be beaten by her adoptive uncle. It was then that Muyak thought it best to tell Lira of her true origin. As Lira grew, she and Muyak waited for the day that the portal will open once again and they can both finally go home to Encantadia. Lira grew up fully aware of her orgin though dangerous, in case of emergency Lira will not hesitate to use her powers one time when a man pushed her away making him the one to be in danger. The man introduced himself as Anthony before bidding farewell to each other. Her Uncle Berto would often make attempts to expose her extraordinary abilities. He finally succeeded in capturing an evidence by recording the whole scenario where Lira used her powers to save Anthony. Berto would use this to his advantage to ask Lira to steal for him in exchange that he will not expose her secret. Lira refuses however, when Amanda got sick Lira had no choice but to steal making Amanda disappointed with her. When Amanda was killed by a hit and run Berto started pursuing her as he blames her for his sister's death which drove Lira out of their house. She met her Ashti Danaya and they journeyed together to return to Encantadia with the help of Lakan. However, during their journey Lira wasn't able to withstand the intensity and lost consciousness. When she woke up she is already at Encantadia and Cassiopea appeared to them telling them they need to journey to Devas. She gives Lira the Avatar which is a sword she had forged to serve as her weapon. They first went to Ascano to ask for an armor for Lira but Vish'ka challenged them to battle, suddenly, Lira failed, in the next day, Vish'ka surprised Lira an armor that Lira was asking and Lira thanked Vish'ka.

After the death of her mother, Lira lost her interest in sword fighting. She instead decided to become her Ashti Alena's apprentice. Her Ashti Alena taught her how to manipulate her voice and project destructive sound waves. 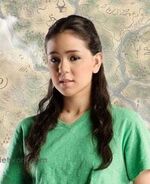 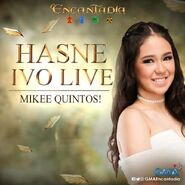 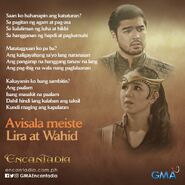 Lira 2005 and Lira 2016 from Mikee Quintos's IG account.
Add a photo to this gallery

Lira's Second Training Outfit as the new keeper of the Brilyante ng Lupa. 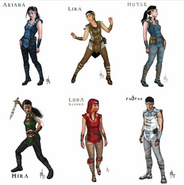 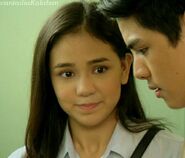 Lira's work clothes, in a close up view.

Vish'ka crowns Lira with her headgear

Her cursed form, at realization. 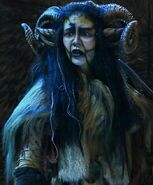 Cursed form (half of her body seen) 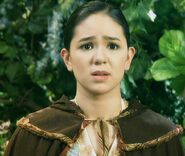 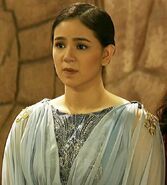 According to Alena, this is Mira's outift, but she wanted to try it on. 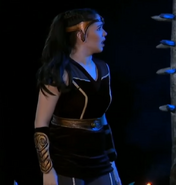 Lira in a new training uniform

Add a photo to this gallery
Retrieved from "https://encantadia.fandom.com/wiki/Lira_(2016)?oldid=41264"
Community content is available under CC-BY-SA unless otherwise noted.