Fatally slashed and stabbed in the abdomen by Andora.

Memfes is a minor character from the Philippine fantasy television series, Encantadia. He is known as the chief leader of the Gunikars. He is portrayed by Lance Serrano.

Memfes is the chief leader of the Gunikars, a tribe near the land of Adamya.

As Sang'gre Alena arrived in the land of the tribe of Gunikar, she called them out and asked them to show themselves. One of them peeked on the Sang'gre behind the rocks as she was still looking for them. Alena then promised that she will not hurt them and not take revenge for what they have done against her and Pirena as more of them peeked behind the trees. She then asked them again where they are and to finally show themselves to her. As she turned around from a Gunikar that she noticed, one of them played a music from his flute, causing the Sang'gre to hear its tune and fall asleep. After Alena finally collapsed, a group of Gunikars then approached her.

Proposing to Alena to be his Wife

Inside their hideout, the Gunikars were examining the things that they have stolen the Adamyans. Moments later, Sang'gre Alena has finally woken up from her sleep, prompting the Gunikars to hide once again from her. As the Sang'gre looked around, she found herself inside the camp of the creatures, and heard a voice somewhere, saying that she was already awake. Alena then asked where and who he was. The voice introduced himself as Memfes, the leader of the tribe of Gunikars, who are fighting against the Adamyans. Memfes then apologized for what he had done to her, which is using his flute to make her fall asleep and bringing her to their home. The Sang'gre then asked Memfes where he is, and why he does not want to face her. She commanded him to show himself so they could talk about things clearly. The Gunikar then asked the Diwata what should they talk about, and Alena replied about them and the Adamyans could be friends. She then added that they cannot fight each other, and raiding them every time she leaves the land also cannot happen. As she pleaded to them to show themselves to her, a Gunikar appeared. He revealed himself as Memfes, and asked if the Sang'gre cannot believe his appearance. Alena replied that she was only surprised, but it is not important. She then went back to what her demands are, so there would be peace in Adamya again. Memfes then said that he will only grant her wish if she agrees with him to be his wife. The Sang'gre thought it as insane and she told Memfes about what she felt about it. Memfes insisted to what he wanted in return, which is to marry anyone of the powerful daughters of Mine-a, and if she will not agree to it, he cannot promise that he will stop wreaking havoc against the Adamyans. Already had enough, she brought her Brilyante in front of Memfes, prompting the Gunikar to retreat and hide once again.

Memfes and his kind seems to possess different skills and abilities. 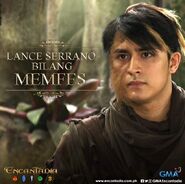 Promotional
Add a photo to this gallery
Retrieved from "https://encantadia.fandom.com/wiki/Memfes?oldid=41212"
Community content is available under CC-BY-SA unless otherwise noted.