These are fictional items that diversify the plot of this show. They give the users powers and support in times of need.

The Mother Gem containing the powers of the five elements - Fire, Air, Water, Earth, and the Fifth Element, Quintessence - was created by Emre to aid the four territories in destroying Etheria. After serving its purpose in Etheria's destruction it became the reservoir of balance. When Cassiopea was still the Queen of Lireo, she became the gem's keeper. After ending her reign, she lived in her own island and placed the gem in a table. Because of the massive power it contains, Adhara took interest of it and tried to claim it. Fortunately, Cassiopea destroyed Adhara's Battalion by using the gem. In order to keep it safe, Cassiopea then used the Kabilan to cleave it into four (later revealed to be five) gems.

The gems have their new look and shape inspired by things related to their element. 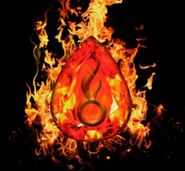 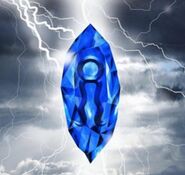 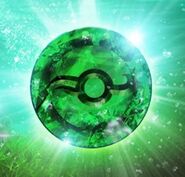 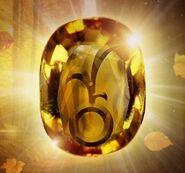 Their keeper only has to give a command that doesn't defy their limitations and it will be granted. It isn't neccessary to mention the name of the gem when summoning it or giving command to the gem. Paopao calls the soul gem Kaibigan and Pirena often calls the gem she has Brilyante alone.

- Mentioned by Danaya that the gems works more effectively and more powerful if they personally picked it's owner.

Effects on the surroundings

Hagorn mentioned one time that wherever a keeper is around the area there is a certain effect on the surroundings of the area. The effects of the other brilyantes are still yet to be revealed.

The air is dense if the keeper of the Brilyante ng Hangin is around.

The colors of the plants are lively if the keeper of the Brilyante ng Lupa is around.
Add a photo to this gallery

The gems have a life force of their own, they can protect themselves from those who will try to steal them. They can also disobey their keeper when they give a command that will cause harm to themselves. A shard of a gem can also morph to look like the gem. The gem cannot obey someone if it is missing even just a tiny piece of itself as shown with what Pirena did to Hagorn to save Mira and Lira.

The gem returns to Pirena after showing the shard.
Add a photo to this gallery

The gems give their keepers various abilities oriented to the element the gem possesses and symbolizes. However, there are limitations to these powers.

The gem(s) is/are able to confer judgment to any denizen in Encantadia. Given the command by its/their current keeper it/they will examine that Encantado/Encantada/group and determine if he/she/they are telling the truth or not. If permitted by its/their keeper(s) it/they will be the one to execute punishment such as instant death.

The powers of the four elements were originally contained in a white diamond-shaped gem called the Gem of the Elements. During her reign, Cassiopea cleaved the once single gem and became four gems in different colors and shapes. (Diamond shaped Ruby, Circle shaped Sapphire, Oval shaped Emerald and Rectangle shaped Topaz.) Each of the gems contained separately the powers of the four elements Fire, Air, Water and Earth.

The history of the four elemental jewels date back to the First Great War with the fall of the Etherian Empire when it was still a single gem. It extends all the way to the present Encantadian timeline.

The four brilyantes were initially created as a single gem that the Bathalang Emre bequethed to the leaders of the rebel alliance against Etheria and of the Council of Encantadia (Bartimus of Hathoria, Meno of Sapiro, Cassiopea of Lireo, and Aegen of Adamya) to aid them in their struggle against the Etherian Empire. During that time, the jewel was entrusted to the most stable nation at the time, Sapiro.

King Arvak of Hathoria, resentul of Cassiopea's decision and deeply concerned by Hathoria's lack of apparent natural resources, launched a campaign of conquest throughout Encantadia, aided by his son and heir Hagorn.

They successfully conquered Adamya and acquired the Brilyante ng Tubig, but were stopped cold when the Sapiryans came to Adamya's rescue. Though successful in slaying King Armeo and acquiring the Brilyante ng Lupa, King Arvak died at the hands of Prince Raquim, and he takes all the three gems.

To ensure its protection, Sapiro's Prince Raquim traveled to Lireo and gave the three gems to the queen of the Diwatas, Minea's custody and guardianship of all four elemental jewels, assured that the powerful Lirean throne would never let the brilyantes fall into Hathorian hands.

The brilyantes remained safe in Lireo for years until Sang'gre Pirena through the influence of Gurna stole the Brilyante ng Apoy to aid her in defeating Ynang Reyna during the challenge for the throne. Failing in her attempt and bitter of Minea's imagined favoritism, Pirena fled to Hathoria, carrying with her the Brilyante ng Apoy as a bargaining chip with its now King, Hagorn.

The gems existed in the form of the Brilyante ng Kalikasan which was created by Emre to aid the four kingdoms against Etheria. The gem contains all the four elements of fire, air, water and earth.

When a keeper receives guardianship, she binds her life force to the jewel, and effectively becomes its personification and vessel. This grants the keeper unlimited access to its power, as well as becomes the master of its Spirit Guides.

One of the many abilities granted to a keeper is the ability to bestow blessings to any creature or object they wish. One case of this was when Lira, while still in her mother's womb, was blessed by her aunts Alena and Danaya with the gift of a beast-taming voice and protection against Pirena's powers, respectively.

Guardianship of a jewel may be obtained through two ways: free will or death. A jewel must be bequeathed by the keeper of her own free will, or it may be taken from her upon her death. These rules are not set in stone, however, and particularly creative keepers have been known to work their way around them when the need arose. Moments before her death, Pirena commanded the Jewel of Fire to remain with her even in the afterlife, causing all light and warmth to disappear from all of Encantadia.

Though the keepers of the brilyantes have changed hands several times over its history, the most important of its keepers were the four daughters of Ynang Reyna Minea:

In the 2016 series a fifth keeper is introduced:

In 2016, the brilyantes are passed on to one person to another, here are the holders of each gem in accordance to the timeline:

During the New Threat Arc of the requel, Hara Duri-e Cassiopea with the Symbols of the Gems went on a quest to find the rightful saviors and keepers of the gems.

Retrieved from "https://encantadia.fandom.com/wiki/Mga_Brilyante?oldid=41234"
Community content is available under CC-BY-SA unless otherwise noted.