Hashtag of the day:

Propesiya (English: Prophecy) is the 2nd episode of the Philippine fantasy series Encantadia produced by GMA Network. This episode is divided into 2 chapters. The official hashtag for this episode is #EncantadiaPropesiya

Adhara is sent to Balaak after being killed by Mine-a. She then meets a dragon, pleading it not to eat her. The dragon reveals himself as Arde, one of the three (later revealed to be actually five) Bathalas that created Encantadia who was cursed by Emre to be a Dragon to protect the souls of those who were thrown at Balaak as punishment for attempting to kill him. Adhara pleads Arde to bring her back to life, however, Arde cannot do so but instead he gives her a "good curse" that once Mine-a dies, her soul will able to come back to life to which Adhara eagerly awaits.

As the battle between Sapiro and Hathoria continues, Alira Naswen tried to fight Agane but fails, telling Alira that she has one thing "to take care of" (later revealed to be Arvak's order to her to "fetch" Armeo's wife and Son).

Meanwhile, as Mine-a is about to give birth, Gurna promises Sang'gre Pirena to protect her in case the Hathors attack Lireo, who unlike her Mother who puts more interest to the Infant than her.

The battle between Sapiro and Hathoria concludes in the death of both their kings; Armeo dies because of massive blood loss after being stabbed by Arvak, who was then shot by Asval's arrow. The moment Arvak died, the Infant from Cassiopea's prophecy was born. Mine-a expressed her wishes to the child, whom she named Amihan, after her deceased Sister. As Mine-a introduced Amihan to Pirena, Pirena showed her displeasure for having a Sister, to which Mine-a told her not to worry for her love towards her and Amihan are equal, this caused the Damas to notice Pirena's attitude, thinking that it came from her father but Ades told them that she can't reveal it. A troubled Pirena begs Mine-a to reveal who her father is, to which Mine-a prefers not to reveal it since he is already dead and mentioning him would be useless.

As Raquim possesses the three brilyantes (taking the Fire & Water gem from Arvak, while Armeo gives him the Earth gem), Asval sees this as a opportunity to use it to conquer Encantadia, to which Raquim rejects, who thinks that him, nor Arvak, nor any other Sapiryans are not worthy of holding the Gems and that his only dream is "to have peace in the whole realm of Encantadia". As Raquim and his army returned to Sapiro, he discovered that the Queen was also killed and that his nephew, Prince Ybrahim is missing, thinking he was also killed. Meanwhile, As Hagorn mourns the death of his Father, Asval came to him and blames Raquim as the person that killed his father and that he is now in possession of the three gems.

While Sapiro and Lireo celebrate their victory over Hathoria, Hagorn becomes the King of Hathoria vowing revenge on Raquim. After the farewell ceremony for Arvak, Agane reported to Hagorn that a diwata was reported to have been circulating the first portal of Hathoria, revealed to be Gurna, who is found to be an ally. Gurna tells Hagorn that Mine-a's child was born, revealing to him that Raquim is the infant's Father. Hagorn thought of a plan on how he can avenge his Father's death. 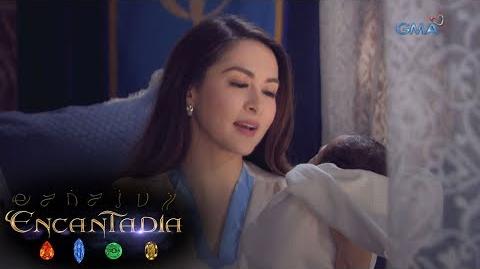 Encantadia 2016 Full Episode 2
Add a photo to this gallery

Short Clips from the Episode 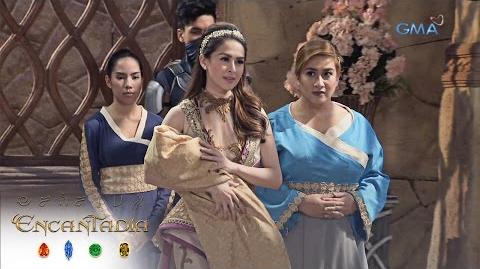 Encantadia- Ang pagsilang kay Amihan
The teaser for this episode 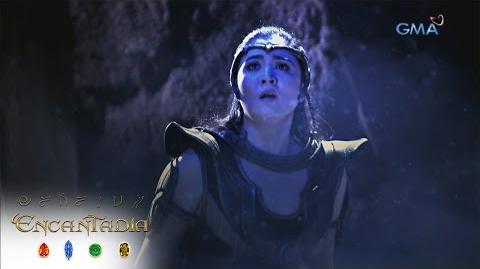 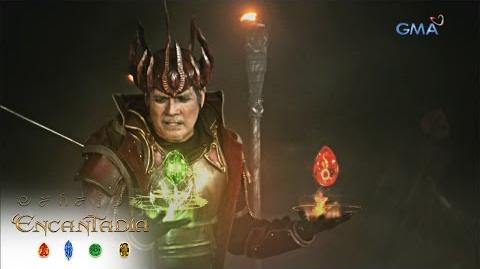 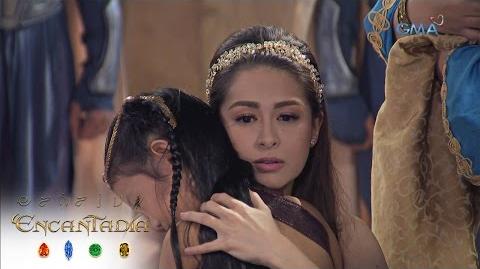 Encantadia- Paninibugho ni Sang’gre Pirena
Add a photo to this gallery
Retrieved from "https://encantadia.fandom.com/wiki/Propesiya?oldid=41538"
Community content is available under CC-BY-SA unless otherwise noted.