Sang'gre is the Enchanta term used to refer to a royal blooded encantado, who as such possesses special powers and destinies above those of a commoner. Sang'gre is also used as a title or honorific for such Diwata royalty, who are addressed as Sang'gre before their names.

A Sang'gre is identified by a distinctive birthmark on their left shoulder blade that corresponds to the symbol for Lireo (and the Wind element). The symbol oddly resembles the nga character of the Baybayin script, an ancient Filipino writing system.

Sang'gres have the ability to teleport or vanish and instantly transport themselves (and others who would touch them) to another place. However, while this skill is already second-nature to them, they cannot perform it when they are physically bound or are severely wounded. A Sang'gre's word is all-powerful; his/her curse is feared for it always comes true. They are also the only encantados/encantadas who can be seen by the naked human eye.

The known Sang'gres are listed hereunder, in order of their ages, from eldest to youngest (Demetria and Ursula though became Queens of Lireo they aren’t of royal blood meaning to say they aren’t Sang’gres):

There are certain names that can only be used by a sang'gre or a being with royal blood. Pirena recalled this after hearing Adhara's name, saying that it's impossible for one to have that name because it is a name exclusive only to a sang'gre, thus using it to name a normal encantado is a sin. 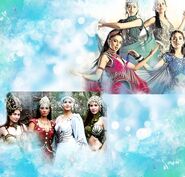 Mira looking at her Sang'gre Mark.
Add a photo to this gallery
Retrieved from "https://encantadia.fandom.com/wiki/Sang%27gre?oldid=41132"
Community content is available under CC-BY-SA unless otherwise noted.