A gold Sarangay head on a brown field

Sapiro is a fictional kingdom in the land of Encantadia, the fantasy world in which the Philippine television series of the same name is set. In the series, Sapiro is the land of the Sapiryans (english plural), a race of valiant and skilled warriors.

Sapiro is one of the four major territories that comprise Encantadia, the others being Lireo, Hathoria, and Adamya. Sapiro suffered massive losses during the massive invasion by the Kingdom of Hathoria and was left in ruins. The battle against the Hathor caused the deaths of King Armeo and his Queen Asnara, the presumed loss of the heir Prince Ybrahim, the exile and eventual of Armeo's cousin Prince Raquim, and the disappearance (later revealed to have actually been a case of desertion) of key military leaders like Asval. With their home destroyed and their leaders gone, the surviving Sapiryan troops have sworn fealty to the Queendom of Lireo, under the guidance of Alira Naswen, while others are probably living as nomads or have aligned themselves with the likes of Asval.

The kingdom follows a traditional Monarchy wherein the king is the supreme ruler of the kingdom followed by his queen and their children. It is unknown how the line of succession works when the king has no heir, whether it is the first born son will be its next ruler and if a woman can rule over the kingdom. Because Sapiro is a warrior society, they are better at tactics and strategizing than the army of Lireo. Sapiro is traditionally patriarchal, in contrast to Lireo, where only women are allowed to rule. Unlike the laws of Lireo that prohibit the Queen from marrying, the ruler of Sapiro is allowed to marry.

The Sapiryan are best known for their unmatched skills in swordsmanship and archery. They are also proficient in hand-to-hand combat. They are brave and steadfast, making them great allies and dangerous enemies in battle.

The Kingdom of Sapiro is situated to the north of the known world of Encantadia. It was founded by an Encantado named Hamir who was loved dearly by the Bathalumang Haliya. He used the diamonds and golds from Haliya's home (the moon) to situate the palace. He is presumably Sapiro's first King as he was addressed as Kamahalan.

Following the cleaving of the Inang Brilyante by the Diwata Cassiopea, the Sapiryans, under the rule of King Armeo, were entrusted with the keeping of the Brilyante ng Lupa/Earth Gem.

The land of Sapiro had been blessed with rich vegetation, and probably stone quarries that allowed the Sapiryans to construct their palace and cities.

Apart from the Sapiryan warriors, Sapiro is also home to a small band of people who conduct raids on unsuspecting travelers, lead by a man named Apitong.

In their quest for domination of the other territories, the Hathor attacked the Adamyan and acquired the Water gem, therefore gaining enough confidence to assault the Sapiryan next. Despite reinforcements from the Queendom of Lireo and precautions like evacuating the Queen and the infant Prince Ybrahim from the Sapiryan palace, the Hathor invasion still proved devastating. Despite their losses, the "last stand" of the Sapiryan forced the Hathor into retreat. The victory paved the way for the Fire and Water gems, and later the Earth gem as well, to be reclaimed from the Hathor and given to Queen Mine-a.

Following the war, the remaining forces were forced to abandon Sapiro and relocate to Lireo, under the leadership of Alira Naswen.

Sapiryans are known to be resourceful especially when it comes to nature. According to the narration of the 2016 version of Encantadi. Sapiryans have the ability to trace the bountiful location of the earth's minerals. Although not all, a huge percent of Sapiro's inhabitants are also capable of talking to animals and other life forms. Lira, Alena and Danaya are the few half-blooded Sapiryans who appeared to have the ability of zoolinganism. Amihan, a halfblood and Ybarro(A Royal Blood Sapiryan) is not shown to have such ability.

Sapiro's landscape are very much similar to Lireo, it contains vast forest of different kinds, and so many mountain ranges.

The Kingdom of Sapiro is ruled by a King. However, unlike Lireo, rulers of this kingdom are allowed to wed and have children, keeping them in the same roof. It is unclear if it is allowed for the Queen to rule to fulfill the King's absence.

It is also safe to assume that Sapiro is the richest kingdom in Encantadia in terms of monetary wealth.

Sapiro is known to have at least more than one general or Mashna. Alira Naswen once introduced herself to Ybarro as one of the king's general/mashna. The royal army are also known to use maces and round hard shields in battle.

Due to its vast territory, Sapiro holds a number of tribes, where some recognize the ruling monarch of Sapiro, while others does not, such as Punjabwes have their own prince or Rehav and the Barbaros.

Ascano - Located in the Northwestern part of Sapiro where the Barbaros and Gigantes live.

Bandit Territory - Located in the North of Sapiro.

Adjantao - Located in the Southeastern of Sapiro between Sapiro and Lireo where the mandirigma live.

Land of the Nymphs - Located in the South of Sapiro, between Hathoria and Adamya, now resides in the North of Sapiro at the behest of Hara Duri Cassiopea. Though, it is originally Adamyan territory.

The entrance to the Dakilang Moog

The view of the Dakilang Moog from inside Sapiro.

The prospering of the once fallen kingdom of Sapiro.

The landscape view of Sapiro during Rama Ybrahim's reign.

Sapiro when it was abandoned

Entrance to Sapiro after the fifteen year timeskip.

Sapiro after the fifteen year timeskip.

Hagorn and his troops attack Sapiro.

Sapiro after being attacked by Hagorn's troops.
Add a photo to this gallery 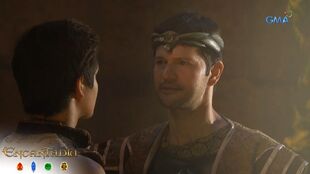 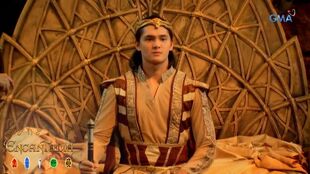 Ybrahim
Add a photo to this gallery

Events that perspired in Sapiro 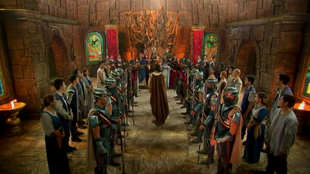 The coronation of Rama Ybrahim. 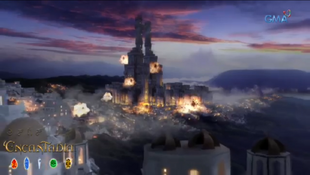 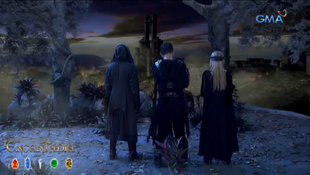 Hagorn, Asval, and Andora watches as Sapiro burns.
Add a photo to this gallery
Retrieved from "https://encantadia.fandom.com/wiki/Sapiro_(2016)?oldid=41136"
Community content is available under CC-BY-SA unless otherwise noted.