Buhay (as a corpse)

Wahid is a minor character in the requel of the Philippine Television fantasy series, Encantadia produced by GMA Network. He is played by Andre Paras.

Wahid is a Barbaro who is the second in command next to Vish'ka of the tribe of Gigantes and Barbaros.

Wahid is a responsible commander who knows how to abide by the rules of their tribe however, he is willing to disobey the rules to aid those in need specifically Ybarro and Wantuk. He is prone to being easily tricked. He has been tricked twice since he appeared in the show. First is when Wantuk made him look up because something is there but the truth is there is none. He only said that to distract him. The second time was when Agane appeared out of nowhere to give some entertainment he did not find it suspicious. Wahid can also be arrogant in front of everybody especially Lira boasting about his achievements or possessions but during battle he becomes a coward and is easily scared when he is lured to danger. 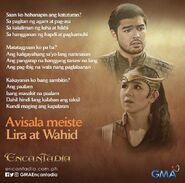 Add a photo to this gallery
Retrieved from "https://encantadia.fandom.com/wiki/Wahid_(2016)?oldid=34432"
Community content is available under CC-BY-SA unless otherwise noted.